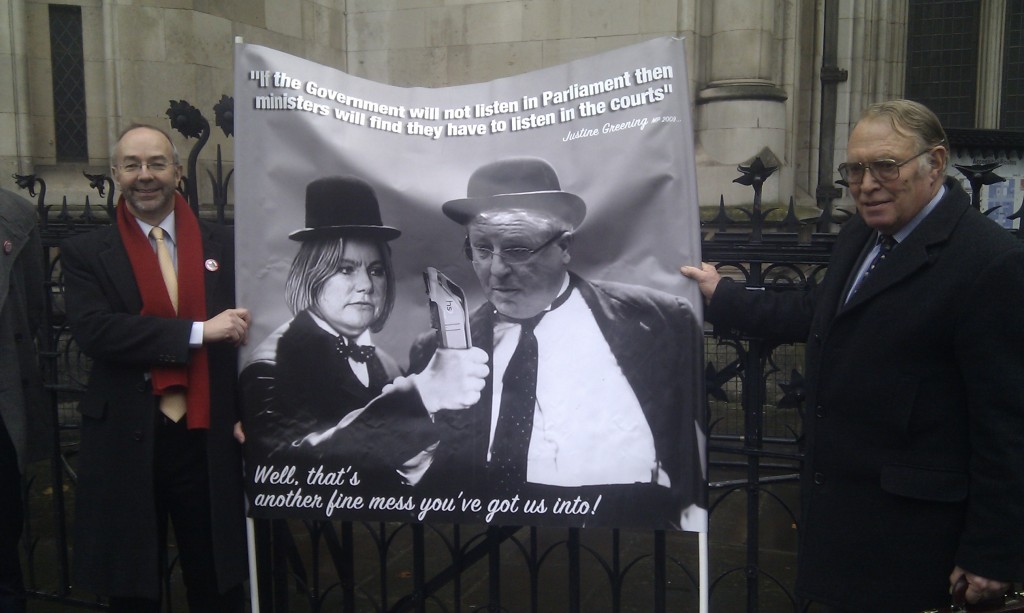 After consistently refusing to release actual passenger figures on the West Coast Mainline to campaigners for over two years on the basis of commercial confidentiality, HM Treasury solicitors finally caved in on Friday, just before the Judicial Reviews on HS2 commenced. Officials released 2011 passenger numbers which were revealed in the Administrative Court today by Nathalie Lieven QC, who is representing the 51m Alliance of 15 local authorities brining one of the five challenges.

Following analysis from Chris Stokes, a former Director of both Network Rail and the Strategic Rail Authority who drew up the ‘optimised alternative’ supported by 51m, it was revealed by Ms Lieven that during the peak three hours in the evening, trains heading north out of Euston were only just half full, with an average loading factor of 52.2%. The 51m Optimised Alternative advocates, amongst other things, lengthening trains and switching some first class carriages to standard. It was shown today that based on the 2011 figures, first class carriages were on average during those three peak hours only just over a third full, with a 35.2% loading factor.

Part of the case put forward was that without those figures being available, it had been impossible to see if the Optimised Alternative would be effective, and that it was unfair that reports were commissioned and published from Network Rail and Atkins before the conclusions of the consultation had been reported. Nathalie Lieven QC had earlier made arguments that it had been unfair to for the Government to conduct a consultation into the principal of a HS2 network to Leeds and Manchester, without any route plans beyond Lichfield, which would mean tens of thousands of people who would be affected by HS2 in the future were disenfranchised, and also that while benefits of the line beyond Birmingham were included in the 2011 consultation, disbenefits, especially environmental disbenefits, for the northern route were not which could artificially inflate the case for building the project.

“It is inevitable that a number of people north of Lichfield will be seriously and directly affected by HS2 and due to the nature of the consultation process, they have been deprived of the opportunity to put their views.”

“HS2 Ltd have been saying today that they are confident everything has been done legally and properly, but if that were without doubt, the Judge wouldn’t even have allowed these five cases to get to court in the first place. The fact we are here is a direct result of the complete incompetence and disregard for due process which HS2 Ltd have shown from the outset. We have always thought that the consultation process was completely flawed, besides the fact HS2 Ltd consulted on the idea of the Y route without actually having a plan of the Y route, they didn’t even bother to write to people whose houses they knew they would be knocking down.”

“Today I have seen two Conservative council leaders holding up a banner depicting two Conservative ministers as Laurel and Hardy. When that happens, you know that we are very confident that there are huge flaws in the HS2 project. We have an extremely strong case against HS2 and it is time that the Government looked at the facts and cancelled HS2 immediately. The problem has always been that no-one has been interested in doing things properly, they have just been interested in doing things quickly.”

Penny Gaines added
“The Department for Transport claimed that the WCML franchise process was robust when Virgin brought a judicial review over it. These claims collapsed, and the Secretary of State for Transport was left red-faced to make late night phone calls to Richard Branson to own up his Department’s failings. It’s time ministers owned up to the huge and fundamental flaws with HS2 and cancelled it immediately.”