Following on from the WCML franchise fiasco, MPs and the news media are turning the spotlight on the flaws with HS2. 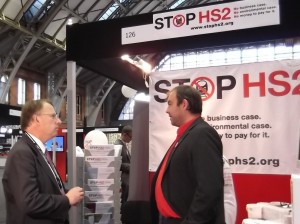 Joe Rukin being interviewed by Michael Crick from Channel 4 news

A group of MPs are set to ask the prime minister to release an assessment by the government’s Major Projects Authority into the proposed HS2 link between London and the north, which classifies the project as “amber/red” – Whitehall code for “in doubt”.

The MPs include Conservatives Andrea Leadsom, Ian Liddell Grainger, Stewart Jackson and Steve Baker as well as Frank Dobson, the former Labour minister. Mr Baker, MP for High Wycombe, said the “incompetence” exposed at the Department for Transport by the West Coast debacle raised fresh questions over the economic case for HS2.

Jeremy Lefroy, Tory MP for Stafford, and Lichfield MP Michael Fabricant said the decision to scrap the award of the contract to FirstGroup raised questions about the business case for the £32 billion HS2 line.

The decision earlier this week by the Transport Secretary, Patrick McLoughlin, to scrap the West Coast Main Line contract has brought into question the overall integrity of the Department for Transport’s decision-making process. With this in mind, I believe that a root and branch re-examination of the whole of the High Speed 2 rail project and its viability is now essential. …

The abandoned west coast main line rail franchise could be followed by the scrapping of the Department for Transport’s controversial planned high speed rail network linking London with Birmingham, its opponents are hoping.