Given that over the last nine years HS2 has lurched from delay, to disaster, to cost overrun, and all backed up with reams of independent criticism of the project, you might be forgiven for wondering just why it hasn’t already been cancelled. This year even the former HS2 chairman Sir Terry Morgan admitted that no-one knows what it would end up costing and that it cannot be delivered on time on budget and to scope, but despite all that, it survives for the same reason it was given life in the first place. As the Eddington Transport Study noted back in the day: “The challenge to be tackled was not fully understood before a solution was generated, due to intense political lobbying from advocates”, with Eddington going on to warn that politicians should “Avoid wasting time and money pursuing alluring new super-high-speed rail networks that might prove difficult and unpopular to stop.”

While Eddington might have been right about HS2 proving difficult to stop, with ‘unpopular’ he was way off the mark. Poll after poll has delivered a giant thumbs down to HS2, and give that the latest one shows that only 32% of Conservative party members think HS2 should go ahead, by now it should be a pre-requisite for any potential leader wishing to secure their votes to say they would cancel HS2, but this penny certainly has not dropped with the candidates.

The fact Andrea Leadsom is not willing to outright say she would cancel HS2 probably demonstrates how much embedded influence the ranks of the HS2 vested interest lobbyists have in the parliamentary Conservative party. After helping organise the first Stop HS2 lobby day back in 2010 and going so far as to say she would lie down in front of the diggers if she thought it would help, she will now only go as far as say she would ‘review’ the project.

This this time last year Michael Gove helped establish that scrapping HS2 is a vote winner when he put feelers out to ask what could be built instead with the HS2 budget, but because of the influence the Westminster Bubble affords mere a handful of special concerns policy remains unrepresentative. After seeming that he might get off the fence last summer and fooling some into thinking that he had, Boris Johnson who like Leadsom has HS2 cutting through his constituency, is also now only committal enough to say he would review the scheme. Simply, calling for a review is a standard tactic. It’s what politicians and parties who do not want to been seen to have taken a position either way on a sensitive issue during an election campaign always do. This tactic has also now been adopted by Dominic Raab, though his leaked manifesto says he would review the “cost-effectiveness” of HS2, sadly displaying a total ignorance of the reality of the project by thinking reducing its costs is an achievable objective.

But not everyone is so uncommittal. Much to George Osbornes chagrin, especially after he reportedly added £600 million to the cost of HS2 to route it away from the more affluent parts of his former Tatton seat, his successor in the constituency Esther McVey has put the boot in to his “out of date and unpopular vanity project”. In the neighbouring constituency Graham Brady has actually voted against HS2. In Penrith, Rory Stewart describes himself as ‘sceptical’ on HS2, whilst Steve Baker has not changed position since he extended his support for the Stop HS2 campaign to St Stephens Tavern after a parliamentary event back in 2011.

Against increasing criticism of HS2, the Northern Powerhouse Partnership which operates as Osbornes’ vested interest lobbying club as the former chancellor continues to grasp for influence beyond the political grave, has been trying to portray the renewed debate about HS2 as some sort of North versus South class war, a veneer facilitated by the construction industry lobby and polished by a handful of stalwart political cheerleaders. As self-appointed mouthpiece for the entire North of England, NPP director Henri Murison went so far to warn the Tories that failing to back HS2 would mean ‘decades in opposition’, a surprising show of concern for Conservative electoral prospects from the former General Secretary of Labour Students…

But despite nine years of trying to con the public that HS2 isn’t about dragging more and more people and jobs to London, the latest YouGov polling confirms the total rejection of this argument, with London being the only part of the country that has ever shown net support for HS2. While Leeds City Council leader  Judith Blake has been the most serial of all the HS2 apologists, selling the idea that the North ‘needs’ HS2 at every possible opportunity, even her council has voted to call for a parliamentary inquiry into the project. All the repeated insistence from the likes of Blake et al that ‘everyone we speak to supports HS2’ serves to do, is demonstrate that regional politicians are just as distant and detached from the people they claim to represent as their Westminster counterparts are.

Away from the leadership race, it’s Chief Secretary to the Treasury Liz Truss who has caused absolute panic in Osbornes clique of HS2 supporters, dropping hints as subtle as a high speed train that it might well not survive her zero-based review of projects. She says the review will cull the white elephants, and not only is HS2 head of that heard, but this would be the perfect mechanism to scrap HS2 and leave the next leaders hands clean. As an added bonus, there could not be a more ready-made and convincing scapegoat for the failure of HS2 than Chris Grayling.

As a result, NPP specifically targeted Truss with a letter signed by a handful of Northern Councillors and NPP acolytes, because she’d had the cheek to say what all the evidence suggests; spending on smaller local transport projects would deliver more benefits to more people more quickly, with the added bonus of it being what the public actually wants. Osborne went on to fling Amber Rudd onto the front page of the Evening Standard like some sort of ventriloquists dummy, before realising a 346 constituency majority is no foundation for a leadership challenge, so next was for NPP to follow-up with a letter to the FT demanding HS2 goes ahead, signatories of which were a mix of a list of HS2 contractors and George Osbornes Linkedin contacts.

Before rushing to support HS2, anyone wanting to appear to be a competent leader would surely want to read the secret Government reports on the project, like the leaked one that said “It would already be considered as a failed project by any internationally recognisable standard”. Realities like this, and the fact it is as the only Government project rated as amber-red for six years straight, explain why HS2 can still be cancelled, as whilst enabling works take place it has still not been given the final go-ahead or ‘Notice to Proceed’.  HS2 should have got the green light last November, but this has now been delayed until December at the earliest, hence why proponents are so concerned about what Truss is up to.

The reason for the delay is to pass the Notice to proceed tests, HS2 has to demonstrate: management capability; the affordability of contracts; and the robustness of a revised business case, but it is completely incapable of passing any of those tests. No part of HS2 has ever been affordable, perfectly demonstrated by the fact HS2 Ltd are now trying to pass the management capability test by tendering out a quarter of a billion pounds worth of contracts to manage the scheme, despite having over 300 managers on over £100k per year at the last count. Even more desperate is trying to bolster the business case for HS2 with a standard trope that it would help create 500,000 jobs in the Midlands and the North, which either being so ballsy as to try and make out that a railway line could eradicate unemployment in half of England, or being so stupid as to not realise that is what they are effectively saying.

Despite this, all the other candidates who have expressed a discernible opinion on HS2 so far are all for it. James Cleverly has said that cancelling HS2 ‘might not be a great look’, though possibly a better look than Matt Hancock saying he supports HS2 despite it being planned to go through his sisters garden, which being in Malpas is around 10 miles from the proposed HS2 route. Sajid Javid has been willing to blindly defend HS2 in the past, but it was Jeremy Hunt who took it things the next level asking: ‘What signal would it send if we cancelled our highest profile infrastructure project?’ This is typical of the bombastic and testosterone-driven fact-free rhetoric that has kept HS2 going through nine years of austerity, and of course spectacularly failed to accept that it has been the catalogue of independent criticism, cost overruns, delays, shoddy justifications and institutional incompetence that has given HS2 such a ‘high profile’.

Of course Hunt did actually ask the right question, what signal would the new Prime Minister send out by cancelling HS2? That they are not in the pocket of the vested interest lobbyists who have conned politicians into backing the project they want to build? That it’s not ‘essential’ to waste what will almost certainly be upwards of £100bn on an unnecessary project, just because £5bn has already been wasted? That they believe in evidence-based policy, opposed to poorly conceived vanity projects which will never deliver on the promises invented to justify their inception?

Another good question is how will it look if during their premiership, the next PM cannot deliver spending on public services against the inevitable headlines of HS2 falling further behind schedule, destroying the natural environment and uncontrollably spiralling costs? Kenilworth, a place where you might expect a dog to get elected if it were wearing a royal blue rosette, has already answered. As the dethroned District Council leader admitted, HS2 helped deliver the town to the Greens in May, a party that had never had a single councillor there before. You would expect this to be more of a concern to the next Tory leader than the ridiculous concept that cancelling HS2 might make them unelectable in Liverpool or Sunderland.

HS2 has had a free pass up until now because politicians have point blank refused to accept any scrutiny that portrayed it in a bad light. Looking at HS2 for what it is, and shutting out the lobbyists who try and make out that their vested interest is actually the national interest, has to be a prerequisite for anyone wishing to be the next Prime Minister. 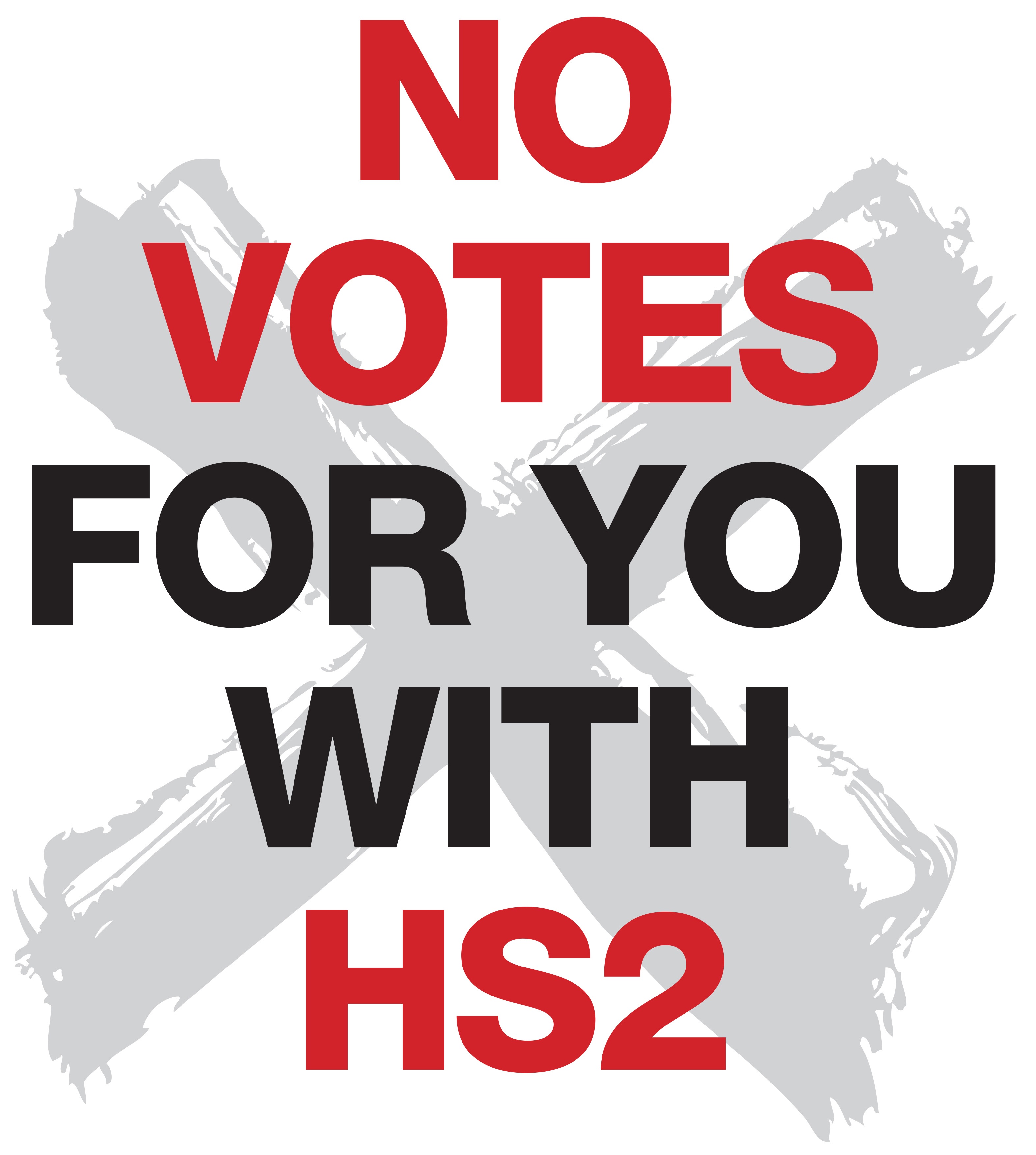