This is a guest post by Madeleine Wahlberg, who isin touch with the No TAV campaign in Italy. 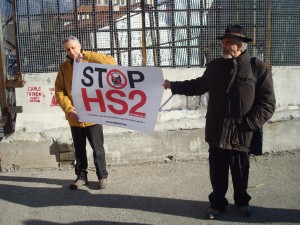 Sounds familiar? Nine reasons behind the ‘no’ of the ‘NO TAV’ movement in Italy

You may have heard that a few days ago, opponents to an Italian high speed rail link were arrested. What’s going on? Here are 9 of the reasons behind their ‘no’. They have been fighting the high speed link through the Susa Valley, running between Lyon and Turin, for over 22 years. They are where we will be in 2036.

1. The capacity figures are ‘up the spout’.

Instead of doubling as had been hypothesized in 2000 in the Declaration of Modane co-signed by the Italian and French governments, demand has been falling. For example, from 2000 to 2009, before the crisis, the total freight traffic on the Fréjus and Mont Blanc highway tunnels fell by 31%. The effective capacity of the proposed new TAV railway line, for both passengers and freight, would be practically identical to the capacity of the existing classic Turin – Lyon line which is currently under-utilized. The TAV demand figures are based on extrapolating from a few peak times between a few places to create the demand figures for the whole line.

2. There is an existing alternative that has only recently been modernised.

Modernization works, paid for by the Italian and French governments and costing around €400 million, were completed on the existing Turin – Lyon line one year ago. Moreover, the new TAV line will not be high-speed for passengers because, being almost entirely in tunnels, the maximum speed will be 220 kph, with stretches at 160 and 120 kph.

Although there are attempts to start the build now, the financial package to build the line is not in place. The current ‘stop-go’ proposal to build small bits as and when money is available, will freeze capital assets (there will be no return on it) at a time when Italy desperately needs to galvanise the economy; it will blight areas for an unknown length of time; and overall it will be extremely expensive to build ‘a metre at a time’.

4. The cost-benefit ratio is beyond a joke.

The current CBR is close to 1:0 – a zero return on capital – and that is based on earlier, questionable financial assessments. However much attempts are made to squirm around the current figures, the project is financially very marginal.

5. The Turin – Lyon TAV line is a very low priority.

Nationwide in Italy there are far higher transport priorities ranging between easing metropolitan congestion and investing in the classic rail network. Many of these urgently needed schemes could deliver far higher benefits – economic, environmental and social.

6. The anti-cyclical role of this project is negligible.

Particularly at this time of economic crisis in the EU, it is not appropriate to invest in large civil projects that require immense amounts of capital over long time-lines. Other types of public spending would provide much more significant multipliers – delivering jobs and financial returns more widely, more quickly and across a wider range of sectors. This TAV line will use up €20 billion (and counting) of either direct state funding, or in state guarantees to cover the debt of private finance – to deliver very little in return. At a time like this, it is madness.

7. The EU TEN-T programme is besotted by straight lines.

The TEN-T programme is a classic case of ‘planners’ madness’. It is based on getting out a map of Europe, drawing straight lines between cities, and calling these essential trade corridors. You or I or a 9 year old could have drawn it up by using a ruler. If you are taken in by lines and symbols, it may LOOK like there are vital links between these cities, especially if you have used a fat pen. But there is no proven functional foundation to the links. Along these ‘corridors’ there can be congested areas (that need far more investment and connectivity than one rail line) alternating with areas that have very modest traffic and that certainly do not merit investment in HSR. The proposed Turin – Lyon TAV is one such link that predicts trade and passenger demand based on the geometry of a straight line.

8. The environmental case is completely bogus

The proposed TCV line is based on a completely inadequate calculation of its beneficial environmental contribution. Its case does not include the calculation of the higher track-building costs required by higher speed/straighter tracks e.g. necessity for more tunnels. It does not take into account the higher running costs that come from higher speeds. The projected modal switch is very minimal (given that passenger and trade traffic is so small between these 2 destinations); and as said above, there is an existing line that could deal with all of the traffic demands. The whole thing is a large environmental MINUS.

Parts of the Susa Valley have now been fenced off and militarised. The police have fired tear gas and water cannon at protestors. Local opposition to the TAV line runs right across society but, except at the local level, it seems the democratic structures are not willing to listen. The people who are protesting and going to prison are not ‘caricature anarchists’. They are farmers and housewives, teachers, nurses, truck drivers and business owners – people like you and me really!  It shows what happens when the democratic structures are found wanting. The TAV line, they say, is not only destroying the environment but as important is that it is destroying the society. [The New Economics Foundation report on failures with the HS2 decision process has made the same point].  If these large, unwanted and unneeded infrastructure projects can only be brought about through ‘the barrel of a gun’, then isn’t the loss to democracy as serious as the loss to the economy and to the environment?

360 professors across Italy have just written to the Italian Prime Minster to stress that the Susa valley HSR link makes absolutely no sense. Cameron and Berlusconi may be blinded by the glitz of vanity projects but let’s hope that Monti listens rather more keenly to the facts!