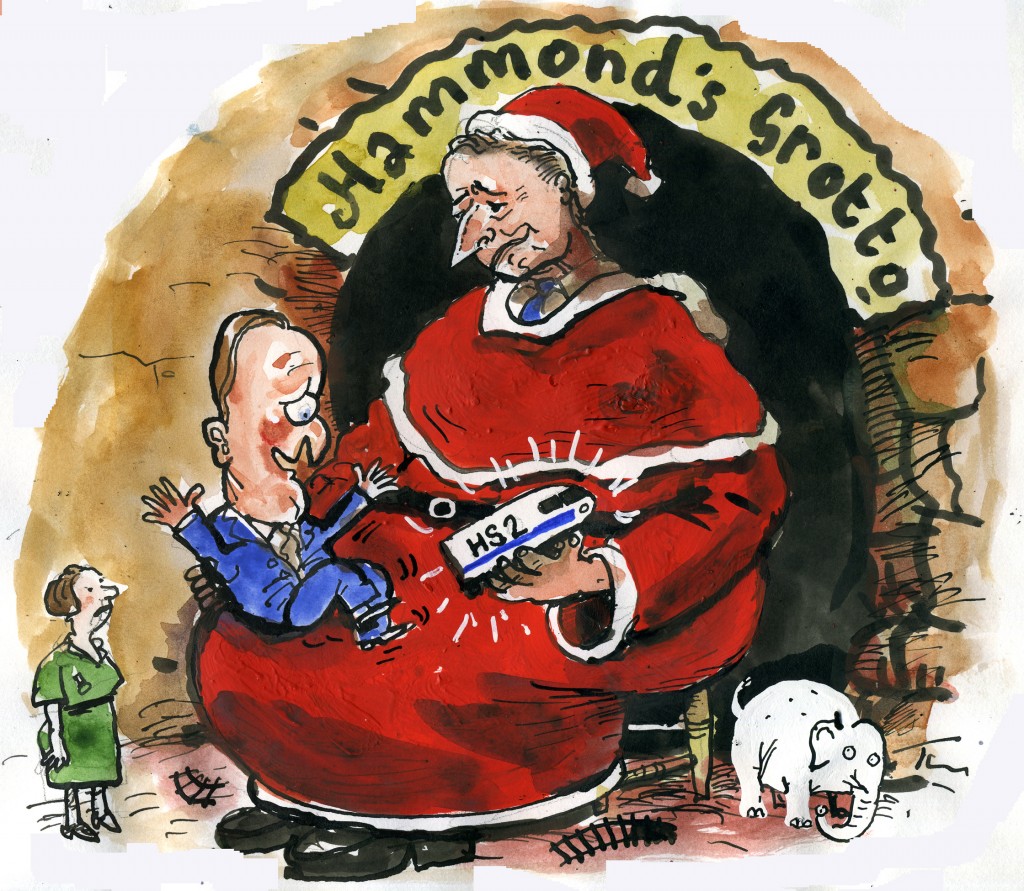 STOP HS2 campaigners will be at the Labour Party this week, delivering the simple messages that HS2 is a white elephant for the rich and it will not benefit the north. STOP HS2 will be turning round the campaign message of the Campaign for HSR, which depicts opponents of HS2 of ‘toffs’, using a cartoon of Secretary of State Philip Hammond as Santa giving David Cameron a HS2 train set, backing up Mr Hammonds comments that HS2 will be a “rich man’s toy”.

Stop HS2 Campaign Coordinator Joe Rukin said: “The Labour Party, and the rest of the country need to see behind the spin from those with vested interests and realise that HS2 is simply a vanity project. Despite the desperate cuts which will impact everyone, nothing has changed in terms of how wasteful projects are pushed for by big business. The business case from HS2 Ltd shows that they predict business on the railways will have an average salary of £68,000, if that doesn’t show that it’s a fast train for fat cats, or a rich man’s toy, I don’t know what does.”

“Just like trying to demonise opponents by depicting them with the bowler hat, the rest of the spin from proponents of HS2, which consists of saying things which people can believe could be true comes straight out of the Goebbels propaganda manual. The idea that the railways are almost out of capacity and that HS2 with cure the North/South divide sound like they could be true, but there is absolutely no case in either of these statements, in fact the truth is exactly the opposite.”

“Academic after academic has said that there is no evidence that HS2 will do anything about the North-South divide, beside maybe make it worse. 50 years ago, the Motorways were meant to cure the divide, but they made it worse. At least the motorways delivered local benefits because they had junctions, just the way normal rail lines which are desperate for the investment HS2 will suck away have stations. HS2 is just about providing a better service for the richest in society who travel between London, Birmingham, Leeds & Manchester. With capacity, there is so much which could be done to increase capacity which has been artificially driven down in part due to restrictive practices and fragmentation which have been brought about in the name of competition.”

“One of the messages that Labour want to get out of their conference is the need to crack down on vested interests. The Campaign for HSR have an open-top campaign bus with Siemens written on the side and the German train manufacturer has a fringe meeting at Labour conference extolling the virtues of high speed rail. It shouldn’t be difficult to join the dots on that one, and given that Siemens have just come in four times over budget computer systems for the passport office, are we really going to be stupid enough to fall for it again? There is a strong lobby from big business for HS2, because they want it and don’t care how much it will cost. We’re meant to all be in this together, but the message from the HS2 plans is more like ‘I’m alright Jack’.”

2. The cartoon can be seen at www.stophs2.org.

email
Tags: News
News
One comment to “STOP HS2 MESSAGE TO LABOUR: HS2 IS A WHITE ELEPHANT RICH MAN’S TOY WHICH DOES NOT BENEFIT THE NORTH.”