Yes, you did read the headline right, as there’s more than a shredder evidence that HS2 are acting illegally! On Friday 6th December, a Stop HS2 campaigner from the South Cubbington Woods camp noticed that HS2 were again taking down trees and hedges, this time on the B4455 Fosse Way near the Welsh Road crossroads between Offchurch and Southam. But unlike previous incidents in the area, it wasn’t work that had happened, it was work that was ongoing. The alarm was raised and within minutes protestors were on site, which is a verge by the side of the road, not where HS2 is planned to go, but where inexplicably a balancing pond well away from the railway on the side of a hill next to a planned roundabout is planned. Yes that’s right, they are cutting down hedge – next to an open field on the side of a hill – to put a pond in, which may not actually turn out to be in the final design. Anyway, with it being part half past two on a Friday, and official lighting up time at this time of year coming before four, contractors simply packed up for the day. The whole thing is covered in the first video below.

However, it was clear that on Monday 9th December when the HS2 contractors came back to work that things would be different. A group of eight people were all ready to act as protectors for when HS2 tried to start work, which again thanks to the limited light at this time of year, wasn’t too early.  While there is normally a fair bit of milling around with this sort of thing, HS2 Ltd decided to get right at it. We were told afterwards that they have been told that whenever there is a direct action intended to stop contractors from working, the contractors have to demonstrate to their bosses that they did at least make an attempt to start work.

Well they certainly did that! Without any warning, a chainsaw was started and after cutting a couple of branches they had missed on Friday of the oak nearest to them, a worker walked straight through half a dozen people, with his chainsaw running, to pick up cutting down the hedge where he’d left off on Friday. Then, the ride-on wood chipper started up to follow him. There was just one problem. while walking through a load of members of the public with a running chainsaw is certainly dangerous, to the level where we are pretty sure there are actually laws against it, doing that is at least it is possible. Trying to get a ride-on wood chipper through a crowd is rather more difficult. Unless you decide just to run into them and push them out of the way. So that’s what they did!

Yes that’s right, they decided that the best way to demonstrate they had made an attempt to start work was to try and physically push protestors out of the way with industrial machinery, something which became top story on Central News that night.

Not long after the incident, the police came. They decided the protest itself was a civil matter and not a criminal one so they weren’t bothered about that, and it was up to me as the person who the woodchipper went into to decide whether or not to make a complaint. I decided not to as no-one needs to get the sack just before Christmas, but I might not have been so magnanimous if I’d have realised it wasn’t just me he’d been aiming at but Eevee too (though of course she had the sense to get out of the way herself), and of course the really obviously coordinated trolling of my Facebook Live post made just after the incident, by people whose profiles give the impression they are best described as maniacs with chainsaws. Hmm…, I wonder how that demographic found out about it so quickly!? Maybe they’d seen when I’d been dressed as a tree and Matt Bishop (who filmed the video above) had dressed in an HS2 uniform and he tried to cut me down, and they’d got confused? 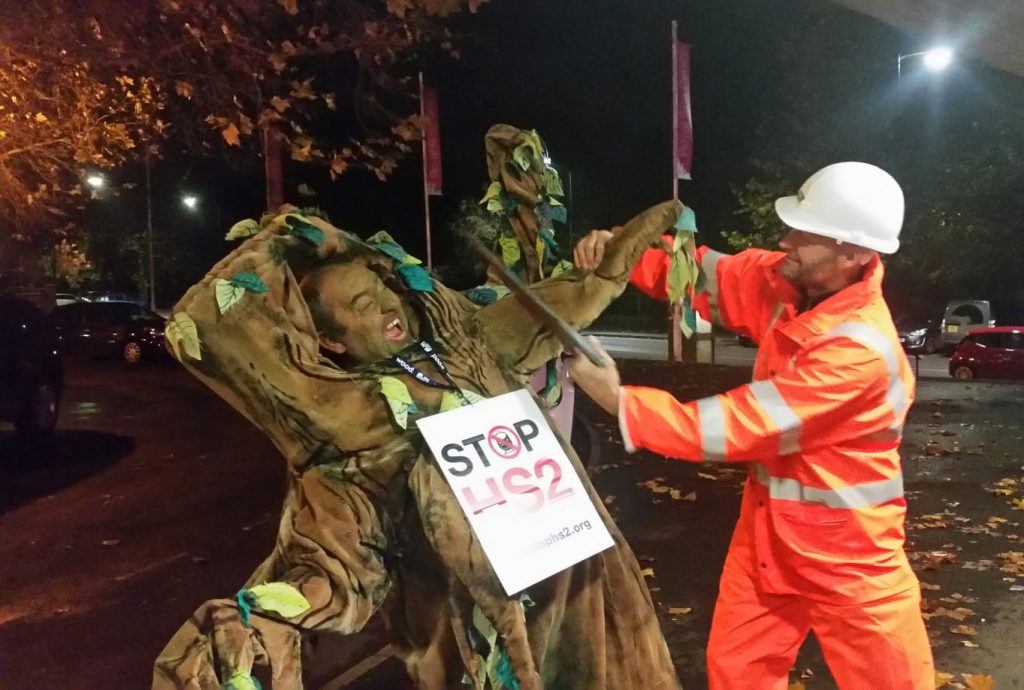 It had been expected that, like the Steeple Claydon protests where locals got in front of tree-wrenching equipment every day for three keeps that this action would just keep carrying on, but for now HS2 Ltd haven’t returned to the Fosse Way. Maybe having their cavalier attitude to human life and surely several planks of health and safety legislation displayed as top story on the local TV news may have had something to do with this? Like what happened with the tree protest in Harvil Road earlier in the year, the Traffic Management Order to close one side of the road runs out on Friday, so if they don’t come back for those trees and hedges before then, it’ll be months before they could come back again – most crucially at this point, that would be after a final decision on HS2 has been made.

Whatsapp
Tags: News
News
One comment to “HS2 Ltd try to get rid of Stop HS2 campaigners with a woodchipper.”