One of the standard tropes currently being used by supporters of HS2 at the moment is to pretend that they have started building it, despite the fact the project has not yet received the final go-ahead, known as ‘Notice to Proceed’. The main reason for this is of course so that they can try and make out it is too late to cancel their gargantuan white elephant. Typical of that was this quote from Rail Minister Andrew Jones, who on February 11th 2019, claimed:

“Already there are 7,000 jobs supported by the programme; already over 2,000 businesses have HS2 contracts; and already the diggers are on the ground in Birmingham. Building has started.”

Separately, they haven’t been able to adequately explain where they got that 7,000 jobs figure, and hilariously DfT and HS2 Ltd have come up with different numbers, but far more disturbing is the difference in attitude response to this question:

“Given that none of the final designs for any part have been signed off as of this date, you could you please specify exactly where ‘building has started’.”

Just to be abundantly clear on this point, I added;

“I do not wish to know where archaeological work, hedgerow clearance, demolitions, utilities diversions and the like are taking place, as these are very specifically enabling works, which do not qualify in any way shape or form as ‘building’ HS2.”

The Department for Transport realised that one of their Ministers had been rumbled, and whilst they tried to cover his back and spin some positives, they did at least come clean and admitted that construction of HS2 has not started, replying:

However, whilst in the past HS2 Ltd and the DfT have clearly coordinated responses to FOIA requests and in many cases provided exactly the same response, this time they came up with something very different, doubling down and attempting to define what ‘building’ actually means:

“By building work HS2 Ltd means all works associated with the building of the new railway. This means that (for example) survey work, ground investigations, demolitions, utilities works, road and traffic management works are al included within that term. Consequently, we have started building works needed for the creation of the new railway in Birmingham, Bucks and Oxfordshire, Euston and Camden, Hertfordshire, Hillingdon, Northamptonshire, Old Oak, Solihull, Staffordshire, Warwickshire. Further information can be found on the Community Websites at https://www.hs2.org.uk/building-hs2/building-the-line/phase-one-london-west-midlands/.”

I wasn’t particularly impressed with this response. Having to explain the meaning of everyday words to a Government quango is not the sort of thing you expect to have to do, but especially given the fact I’d anticipated this response when I asked the original question, I had no choice:

“I find the concept that you consider ‘demolitions’ to count as ‘building’ to be quite disturbing. Knocking something down is actually the opposite of building it. In terms of language we call that an ‘antonym’, meaning ‘a word opposite in meaning to another’. Examples of this include: bad and good; hot and cold; light and dark; construction and demolition; lies and truth. To help with such issues going forward, I have taken the liberty on behalf of Stop HS2 of ordering you a dictionary and thesaurus, which I hope will make it easier for you to understand the meaning of words in the future.” 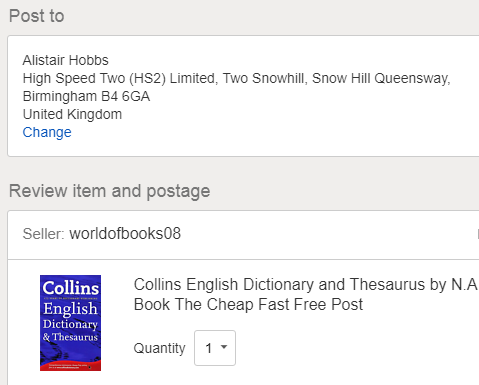 “Additionally, I should also point out that even looking at your own terms, you didn’t answer the question. You simply provided a link, which links to a series of unnavigable ‘commonplace’ sites, which does not contain a full set of the data you have decided I had asked for. As such, please consider this as a request for an internal review, because as I felt I made clear in my initial request, I am not asking about the works HS2 Ltd that have decided to redefine as ‘building works’ or ‘construction’, I am asking about where building HS2 has actually started, as would be defined by any rational person. If you do insist on pretending that the enabling works somehow count as ‘building’, then actually provide details of these sites and what the work entails.”

The internal review has unsurprisingly concluded that HS2 complied with the original request, so we must apologise to everyone who has financially supported Stop HS2 in the past for wasting £3.30 on sending HS2 Ltd a dictionary.

email
Tags: News
News
4 comments to “DfT come clean and admit HS2 construction hasn’t started, whilst HS2 Ltd prove all they can do is lie.”