Notes from Tuesday’s fringe – HS2: its time to think again

Following a brief introduction from John Ashmore, the panelists each spoke for a few minutes on what they saw as the big issues.

Joe Rukin said before the 2010 announcement he’d expected to be supportive of HS2 but that “reading the documents was my cardinal sin. The benefits were essentially made up.”

He made the point that arguments to support the project had been retrofitted and that the official cost masks the real costs of the project. In his opinion, the only reason for continuing with continuing with HS2 was because it was too embarrassing to stop.

John O’Connell (TPA) pointed out there is a wide range of organisations opposed to HS2, saying that they’d held a joint TPA/Green Party event: its one of the few things they agree on. He looked at the various rationales which the government had used at different times: reducing the north/south divide, capacity (he pointed out that there were lots of alternatives that increase capacity. He said it ignored future technology, such as driverless cars and the claimed freight benefits were illusionary.

On the subject of costs, he said that the official costs keep going up, and they don’t include cost of regeneration around stations. “Post Brexit is a good opportunity to get rid of it” he concluded.

John Ashmore added that “a strange reaction to uncertainty is to waste as much money as you can.”

Oliver Cooper thanked everyone who was campaigning against it and said he was speaking from an economist’s point of view. Oliver looked at the productivity gap between north and south with lower wages/opportunities in the north and a brain drain. Building a fast railway is not the way to close the gap. HS2 ignores the main problems e.g. one train an hour into Sheffield, and the need for regional networks

“imagine what you could do with HS2 money to improve links around other stations” he said, before adding that the government see it as a “silver bullet” to help the north, even though even HS2 Ltd say it reduces services.

To applause, Oliver finished that it was “time to scrap HS2 and make sure it hits the buffers”. 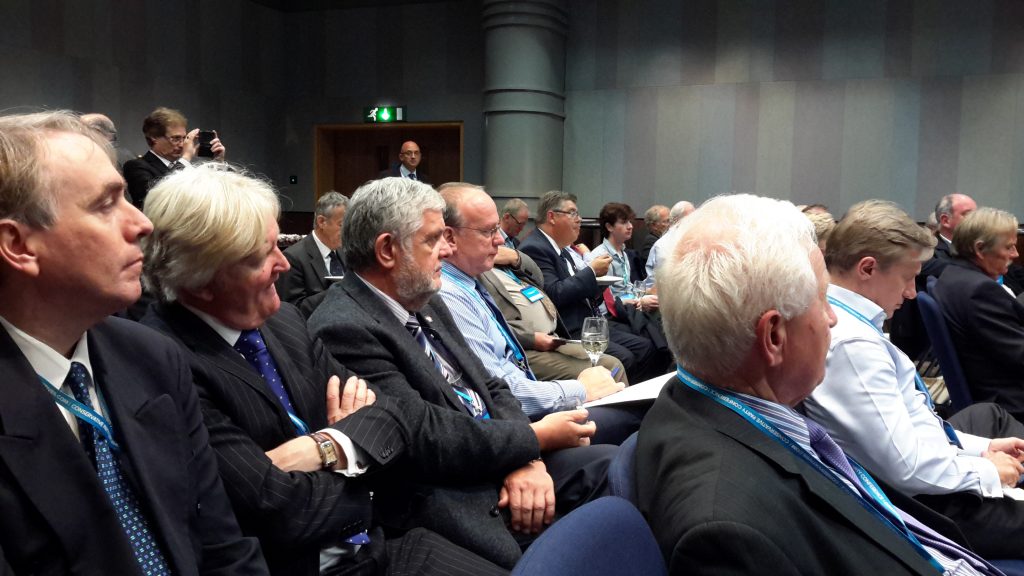 After main speeches, the discussion became more general with Joe pointing out the “greatly inflated business case”, John O’Connell and Oliver Cooper commenting that the real need was on commuter hubs.

Asked what could campaigning do, Joe pointed out the lack of proper scrutiny because of cross-party support, but that when looking at HS2 closely select committees have been highly critical, including the Transport Select Committee. However the Department for Transport have answered none of the points. For instance, HS2 failed Review Point 1 this year, but were still allowed to tender and that the scrutiny was not hard enough on whether it delivers value for money.

John O’Connell said what else can you do, except produce the evidence?

Oliver Cooper said there was a blank slate with this new government and the sunk cost of £2 bn was insignificant compared to cost. He would have preferred to have block of money given to councils

Moving on to advances in tech, there was some discussion of videoconferencing, as well as alternative transport innovations such as maglev and driverless cars. The fear was that Britain would waste a lot of money on dated technology on dated tech

Questions from the audience covered broadband, the issue of mitigation, the real costs of HS2 and the effects on ancient woodland. HSUK, an alternative high speed rail project was also mentioned as was the need for better east-west connections, especially in the north.

Monday’s survey, showing 51% of people living in Birmingham thought it a waste of money (with less than a third thinking it worthwhile) was mentioned. The need to continue campaigning was also emphasised.

Whatsapp
Tags: News
News
One comment to “HS2: its time to think again”