In a speech marking the 150th anniversary of the establishment of the office of the Comptroller and Auditor General, the current incumbent, Sir Amyas Morse has addressed the Institute for Government.

In his speech, he said:

“Let’s stop pretending civil service can deliver what ministers throw at it.”

“Just in the recent past we see extensions in timescale of projected cost in HS2, in universal credit, in many others. All of this is a sign that there is pressure on the system and pressure on the ability to deliver.” 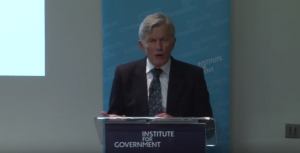 “The civil service needs to get permission to stop doing things that are not mission critical. To decide what to stop doing or delay, Government must get much better at prioritising in its activities and projects.”

“This means working out which projects are use scarce resources and are only really ‘nice to have’, and deprioritising those projects.”

“The Governments portfolio of major projects is enormous. It includes central governments biggest and more riskiest projects, and as of September 2015 it had an estimated whole life value of £405bn.”

“We need to ask ourselves, can the public sector deliver Hinkley Point C, a third runway, HS2, a northern powerhouse, nuclear decommissioning, Trident renewal and restoration and renewal of the Palace of Westminster and many more all at the same time?”

“Many of these projects are drawing on the same pool of skills and many of them contain optimism bias in the planning, we find that again and again, which means they probably will take longer and cost more than originally planned, and they will probably require more resource.”

“In the last Parliament when the NAO reported.., we reported regularly on project failures and ongoing projects which are experiencing major difficulties. Not much has changed since then.”

“On time, I frequently see unrealistic timescales as optimism bias creeps into programme planning. More often than not I would say there is optimism bias on time. So let’s talk about prioritisation. If we are over committed we need to lighten the load, and that means stopping doing things. This can be done by not adding projects or by cancelling existing ones. Prioritising is about making these decisions intelligently.”

Sir Amyas said these problems were exacerbated by the UK’s withdrawal from the European Union and the potential of a second independence referendum in Scotland:

“Add to that our massive major projects portfolio, and my experience of watching the public sector at close quarters tells me the system could come to a halt under its own weight. We will have set civil servants a Herculean task and set them up to fail. And none of us can afford that.”

“So let us use this historic juncture to change the way we manage Government, and plan on an holistic basis so ministers and civil servants can look across the whole of Government activities and can decide what is essential and what is not.”

“We need to be in control of and manage our commitments against the capacity to carry them out, and I don’t think the record so far shows that.”

Whatsapp
Tags: News
News
One comment to “Auditor General: “Government must decide what is essential and what is not””