The committee of MPs scrutinising legislation for HS2 will be told later today [Thursday 4th February 2016] that the projected estimate for constructing Phase 2 of the project has jumped by 39%, according to a response to a Freedom of Information request made by the Stop HS2 campaign.

Last November, it was announced in the Autumn Statement that the overall cost of the project had increased from £50.1bn to £55.7bn, with Government officials claiming that the 11.2% increase in costs was purely to account for inflation increases to bring the previous estimates based on 2011 prices in line with 2015 prices.

The claim that the cost increase was purely to account for inflation was not verifiable at the time, as breakdowns of the estimated costs for the various elements and the associated contingency funds were not published. Freedom of Information requests to HS2 Ltd and the Department for Transport have since revealed that instead of the increase being a straight addition for inflation, the construction estimates for have risen by 15.02% for Phase 1 (£15.65bn to £18bn) and 39.20% for Phase 2 (£12.5bn to 17.4bn).

However, even though there is still no finalised route for Phase 2 which was originally promised for Autumn 2014, the Government has kept the overall cost of the project down by cutting the Phase 2 contingency fund by almost 20% (19.54%, from £8.7bn to 7bn) and reducing both the cost estimate and the contingency fund for HS2 rolling stock, despite the fact that the specification for rolling stock has not yet been set.

The 2011 cost estimate for HS2 rolling stock stood at £5.6bn, with an additional £1.9bn contingency fund. In 2015 prices, these figures now stand at £5.4bn and £1.6bn respectively, moving the overall total from £7.5bn to £7bn, despite a supposed inflationary increase being added to the estimates.

Whilst it was announced in November that ‘Phase 2a’ of the project to Crewe would be ‘fast-tracked’, the overall cost estimate for the project does not include the costs of the proposed station at Crewe. This is confirmed by a document entitled “HS2 Phase 2a: Strategic Outline Business Case, Financial Case”, paragraph 2.21 of which states:

“A new Hub station at Crewe is not part of the existing budget envelope for Phase Two. While further work, including on costs and funding, must be completed before decisions can be taken on whether to proceed, the Government supports the vision for a Crewe Hub.”

A full breakdown of the figures can be found at the bottom and at: https://stophs2.org/costincreasefoitable

“In November we were told that the increase in costs of the HS2 project was purely as a result of adding inflation, but now we can see that was simply not true. The fact the Phase 2 construction estimate has spiralled by 39% is exceptionally worrying, so it’s no wonder they wanted to keep this fact quiet. The fact the contingency for Phase 2, which there is currently no plan for, has gone down along with the cost of the as yet unspecified trains, can only be interpreted at the Government pulling out all the stops to fiddle the figures and keep the published costs down.”

“These clearly made-up figures show one thing, and that is that the Government cannot be trusted to tell the truth when it comes to any aspect of HS2. It is no wonder that the head of the Infrastructure and Projects Authority recently told the Public Accounts Committee that HS2 was the project he was most worried about. It is long past time for the Government to tell the whole truth about HS2, but we know they won’t because if they do even the illogically dogmatic political support for this white elephant will evaporate.”

“So often in the case of HS2, the government headlines have no resemblance to the actual details. The plan to supposedly speed up HS2 to Crewe misses out the costs of constructing a station at Crewe. Contingency costs for Phase 2 have shrunk even though the Department for Transport are still deliberating over the route. The Government didn’t update the costs to reflect reality, instead this is a political fantasy figure.”

1. The Freedom of Information response from HS2 Ltd can be found here: https://www.whatdotheyknow.com/request/breakdown_of_projected_costs#incoming-749136

2. The Freedom of Information response from the Department for Transport can be found here: https://www.whatdotheyknow.com/request/breakdown_of_projected_costs_of#incoming-749134

3. A full table of the 2011 and 2015 costs with a breakdown of cost increases can be found at: https://stophs2.org/costincreasefoitable

4. Paragraph 2.21 of this report states the proposed HS2 Crewe Station is not included in current cost estimates: https://www.gov.uk/government/uploads/system/uploads/attachment_data/file/491752/hs2-phase-2a-financial-case.pdf 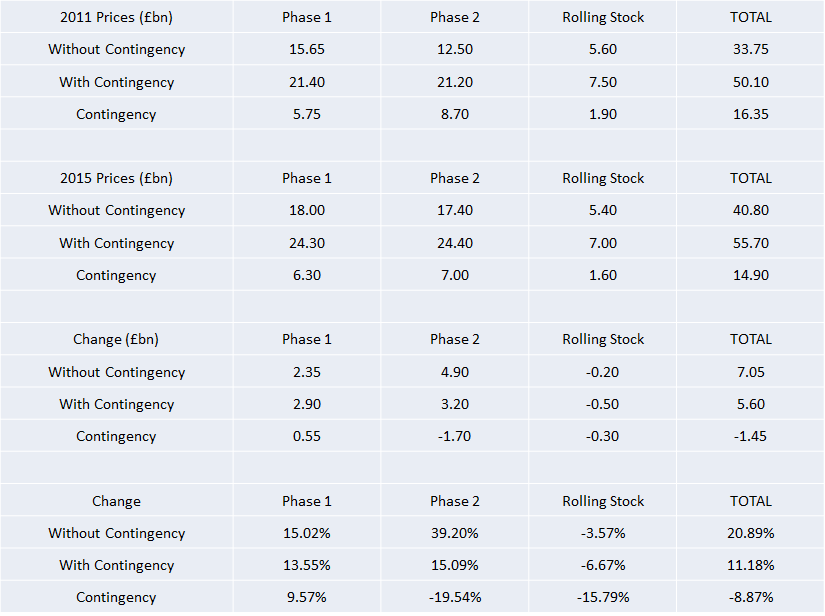