With the final deadline for submission of ‘AP4’ HS2 petitions looming, I went to Portcullis House in Westminster earlier (Thursday 12th November) to deliver another batch of village petitions. 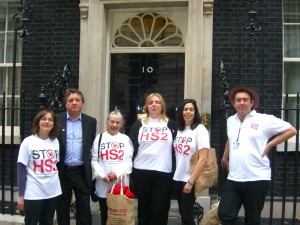 Seb at Downing Street in 2011, to hand in a different type of petition

The ‘petitioning’ phase allows people to argue for additional mitigation including the case for a full Chilterns AONB tunnel. For anyone unfamiliar with this process, this involves taking four signed paper copies of each petition plus other bits of paperwork in person to a dedicated room inside Portcullis House, the main Parliamentary estate building housing MPs offices and committee rooms. Once there , HS2 select committee staff have to literally check each paper copy, place a numbered sticker on each one and record its delivery .

No less than three of the paper copies are forwarded to the ‘promoter’, in this case HS2 Ltd lawyers acting for the government. Despite the fact that we are now in the sixteenth year of the 21st century, it is not possible to ‘petition’ electronically or indeed to post the hard copies, even though we’ve had a postal service for nearly 400 years. The Parliamentary authorities insist that it is done either in person, through an appointed “agent” (more paperwork) or via a Member of Parliament.  For those attending in person or their agents, this means often waiting in a queue and then staying whilst the various checks are completed. And the petition also needs to be accompanied by a £20 fee to help ‘Cover the Select Committee’s costs’. It’s a process almost designed to frustrate and limit the numbers of people willing to petition.

And so it was today that exercising my democratic right to deliver petitions on behalf of villagers, I went to Portcullis House for the third time during this latest petition cycle.  As on previous visits, the security guard operating the airport style scanning machine asked “where are you going?”, to which I replied as I’d done on the two previous  visits “I’m going to the Robertson room to deposit HS2 petitions.”

I said but this is an authorised Parliamentary process with a room set aside in this building for this specific purpose with a final deadline for submission of 13th November.  I was told;

“That’s not my problem. You can’t come in here with mail.”

I explained it is not ‘mail’, they are HS2 petitions and I’ve said exactly the same thing twice before in the last 7 days and been allowed in without any problem.  At this point another security guard appeared to tell me that;

“No-one has been in here with HS2 petitions this week”, (odd since I’d been there with two other petitioners myself on Tuesday and approximately 170 petitions altogether had been hand delivered via this checkpoint before today [220 as of 2pm Thurs- Ed])

And that “You shouldn’t have been allowed in with paper that was a mistake.”

I explained that this was outrageous, to which the first security guard said “Well, HS2 is a controversial subject sir.”

All of this time, literally no-one else had joined the queue to get into Portcullis House, that is for any other reasons, not just HS2. So I now had three security officers all to myself.   What happened next was actually quite intimidating. One of the sub-machine gun holding police officers stationed at the opposite end of the security scanning machine, wholly unnecessarily left his post and walked towards me to say “Keep your voice down.”

I said I was trying to exercise my democratic right and that in the thirty years I’ve been visiting Parliament I had never been treated in this way.  Nor did I know anyone else who had been subjected to such treatment. At this point another more senior security officer appeared to tell me that it had “always” been the case that no-one could enter Portcullis House “with paper” .

He said the only way to do so was to go to another Parliamentary building to have the “paper” scanned separately before then being accompanied by staff from that building directly into Portcullis House.  I’ve been going to Portcullis House since it was first opened and have never been asked to do this before.  I then asked when was this rule introduced because I was here on Tuesday, said exactly the same thing at this checkpoint and there was no problem.  He said he couldn’t tell me what date it was introduced.  I said I’m not asking you for the specific date, but roughly when, last week, last month, last year?  He said it had always been the case over the last couple of years, something I know to be entirely false. 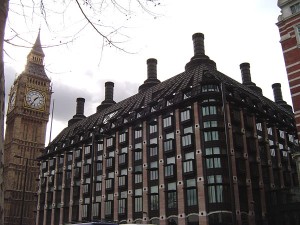 Think about it for a moment.  Every week, thousands of lobbyists, constituents, and other visitors attend meetings at Portcullis House “with paper” . If every one of them had to first go to another building to have the “paper” scanned separately it would be total chaos and the day to day workings of MPs and their staff would grind to a halt. I was then told that “newspapers” are ok “of course Sir,” but no-one should be allowed in with non newspaper “paper” without this additional layer of screening in another building.

Admitting “defeat” I left Portcullis and tried to phone the HS2 Select Committee staff, two of whom of course were sat waiting to receive petitions inside the very building I’d just been barred from entering, but with no landline in the committee room set up for that purpose. [Last time I deposited petitions, they mentioned how ridiculously long it took them to get a landline installed in the room – Ed]

I was told I couldn’t phone them on my mobile from inside the building. Once outside, I managed to phone an extremely helpful Portcullis receptionist, who then had to walk to the petition room to ask the staff member to call me. At this point, Mr Boo Fraga of the committee staff immediately sorted out the problem by talking directly to the security staff, and for this I am extremely grateful, as were the steady stream of HS2 petitioners by now turning up at the main entrance.

Now of course on the day of an important and sensitive State visit to Westminster , I understand fully that security levels can be raised temporarily and with very good reason.  Had that been the explanation for problems accessing the building, it would have been frustrating but understandable.  But at no point, did anyone say that.  Throughout this increasingly farcical episode I was told repeatedly that this was the way it was “always” done, that no-one, including me had deposited HS2 petitions this week (a lie) and that it had been a “mistake” to let me in before with “paper” inside my briefcase.

Throw in the unnecessary intervention of a heavily armed police officer and the comment “Well, HS2 is a controversial subject” and this all leaves a very nasty taste.

If nothing else I hope this episode plays a small part in hastening the day when communities blighted by future infrastructure projects  do not have to go through this utterly ridiculous outdated, frankly Dickensian hard copy petition deposit process.  People living on the front-line of these schemes have a right to have their voices heard and it is nonsensical that they are not allowed to use modern communications to do so.

email
Tags: News
News
4 comments to “The 21st Century Must Have a Better Way to Submit Documents to Parliament”