One of the bits of policy which has recently come out from the Liberal Democrats in the run up to the election are their proposals for “Five Green Laws”. 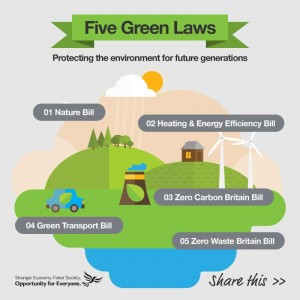 There is a problem with what they are proposing, and of course no prizes for guessing that the problem is HS2, which sort of messes up three of them.

The proposals troubled by HS2 are those for a Nature Bill, which aims to “Ensure that nature is at the heart of government decision-making “, and the Green Transport Bill which is heralded thus: “Transport has a significant role to play in reducing carbon emissions. In the UK, transport is responsible for around 25% of our carbon emissions and is the fastest growing source of carbon emissions. We will bring forward a comprehensive package of transport policies to continue to build a people-centred, sustainable, safe travel system that helps the economy grow.” Also undermined by support for HS2 is their Zero Carbon Bill proposal, which wants to see carbon emissions cuts, via amongst other things, the introduction of “Ultra-low emission vehicles.”

You might be excused for thinking HS2 would fall foul of the proposed “Zero Waste Bill”, but of course that is focussed on recycling versus landfill, not on their being a zero waste of tax-payers money. Very much like the CPRE campaign to protect the countryside, which seems to aim to protect it from everything apart from HS2, with the Lib-Dems, who previously said that a cash value should be put on ‘natural capital’ when assessing rural developments, which would have disastrous consequences for and already disastrous business case, the party seems to willing miss the white elephant in the room that is HS2.

It seems they are so transfixed by HS2 and the supposed benefits it would bring, they are completely unwilling to look at the environmental case, then look back at their own environmental policy and see the two are completely incompatible. The problem is that the generally held view is that trains are an environmentally sustainable mode of transport, or at least more sustainable than alternative modes. This is true, however, as The Green Party has cottoned on to, it is not true when you are proposing a railway line with a design speed of 250mph, as energy requirements exponentially increase with speed. Looking at the current balance of UK energy generation, HS2 trains will be “Ultra-high emission vehicles.”

However, this contradiction is nothing when you look at the political suicide being committed by some of the candidates on the HS2 route. The Stop HS2 campaign has long said that we would hope people would look at the parties opposed to HS2 when casting their vote in May, as candidates in constituencies affected by HS2 would have to be daft to say they are for HS2. Well we were wrong!

You might have hoped that Richard Dickson, Lib-Dem candidate for Kenilworth & Southam, who walked the entire route of the proposed line in the constituency on the 5th anniversary of HS2 last month, might be the one his party colleagues tried to emulate, as potnetial champions of the community. But no, we’ve actually seen Lib-Dem candidates standing in seats along the route, perhaps thinking they have nothing to lose, saying they are for HS2. Recently at a hustings in the Uxbridge and South Ruislip constituency, Liberal Democrat candidate Mike Cox said that if he were elected he would vote in Parliament for HS2. After the meeting, maybe once he realised what he had said, he tried to backtrack trying to claim he would get a massive kink in the line to bypass the constituency, further demonstrating how little he knows about HS2.

Demonstrating you don’t know what you are on about when caught on the hop is one thing, but North West Leicestershire candidate Mark Argent took it to a whole new level, going to the extent of writing a blog for Liberal Democrat Voice, demonstrating that not only had he not got a clue what he was talking about, but also that he wasn’t ashamed to let everyone know about it.

You might think that someone aiming to be an MP in the East Midlands promoting HS2 would at least try and sell HS2 as having a station in the East Midlands, but while he got all the other station sites right, he seemed not to have been briefed on that one. You only need to get as far as his second paragraph to see how little he knows.

“The economic case is overwhelming.  The latest figures I’ve seen suggest that, over the next 30 years, this will cost £32bn to build …“

The latest figures put the cost at £32bn? Really? When did you last look at the figures, two years ago? It’s £42.6bn. Well, the official Government figure based on 2011 prices is. And that’s just building it. If you want trains, that’ll bring it up to £50.1bn, and again that is the cost if you were to build and pay for the whole thing four years ago. Then he demonstrates he has bought the HS2 Ltd documentation hook line and sinker, promoting the idea that HS2 will buck international precedent and actually make a profit, while swallowing the ‘benefits’ which have been torn apart by every independent analyst who has cared to look at them.

He does make one sensible point, in that the constituency, one of the few in the country without a single train station, would benefit from the reopening of the Ivanhoe line, but how that would ‘Spread the benefits of HS2’ is beyond us. We could go on, but maybe you’d like to read it yourself. If your comment gets through the moderator, you will have done better than we did.