The latest in the HS2 propaganda war from the Department for Transport is a publication called “HS2: On track”: meanwhile, HS2 Ltd’s Chief Engineer is promising HS2 trains will never be delayed.

But the reality is that HS2 is like the worst of the British Rail stereotypes: delays, cancellations, fare increases and leaves on the line all have parallels with HS2. 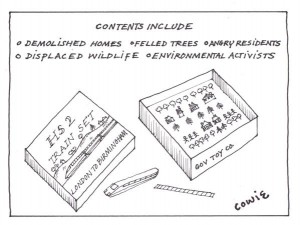 Delays: HS2 was originally supposed to have passed through Parliament in time for the coming election.  Instead, the target date for Parliamentary approval is December 2016.  In addition, the final route for Phase 2 was supposed to have been announced last year, but we will be waiting until next year for that as well.

Cancellations: the link to HS1 has been dropped.  The link to Heathrow, while not actually cancelled and so continuing to blight, is not going to be part of Phase 1 or Phase 2.

Fare increases: the headline figure five years ago was £17bn and now it is £50bn.  To be fair, five years the headline included neither trains or Phase 2, but thats a bit like giving a fare and then saying baggage allowance and station entrance not included.  But then again the London terminus station for HS2 – Euston – doesn’t seem to be included in the figures, due to the huge problems HS2 Ltd are having with it’s design.

Leaves on the Line: for some peculiar reason, HS2 which had to go through the widest part of the Chilterns, takes a dog-leg route through George Osborne’s constituency, which just manages to avoid many of the richest parts.

What have we missed – how else is HS2 like the worst stereotype of a badly run railway?