To mark the fifth anniversary of the original announcement of HS2 by then Labour Minister Lord Adonis on 11th March, the Stop HS2 campaign has unveiled publicity for individuals and campaign action groups to use in the run-up to the election, which will fall foul of the Transparency of Lobbying, Non-Party Campaigning and Trade Union Administration Act 2014, also known as the ‘Gagging Act’. 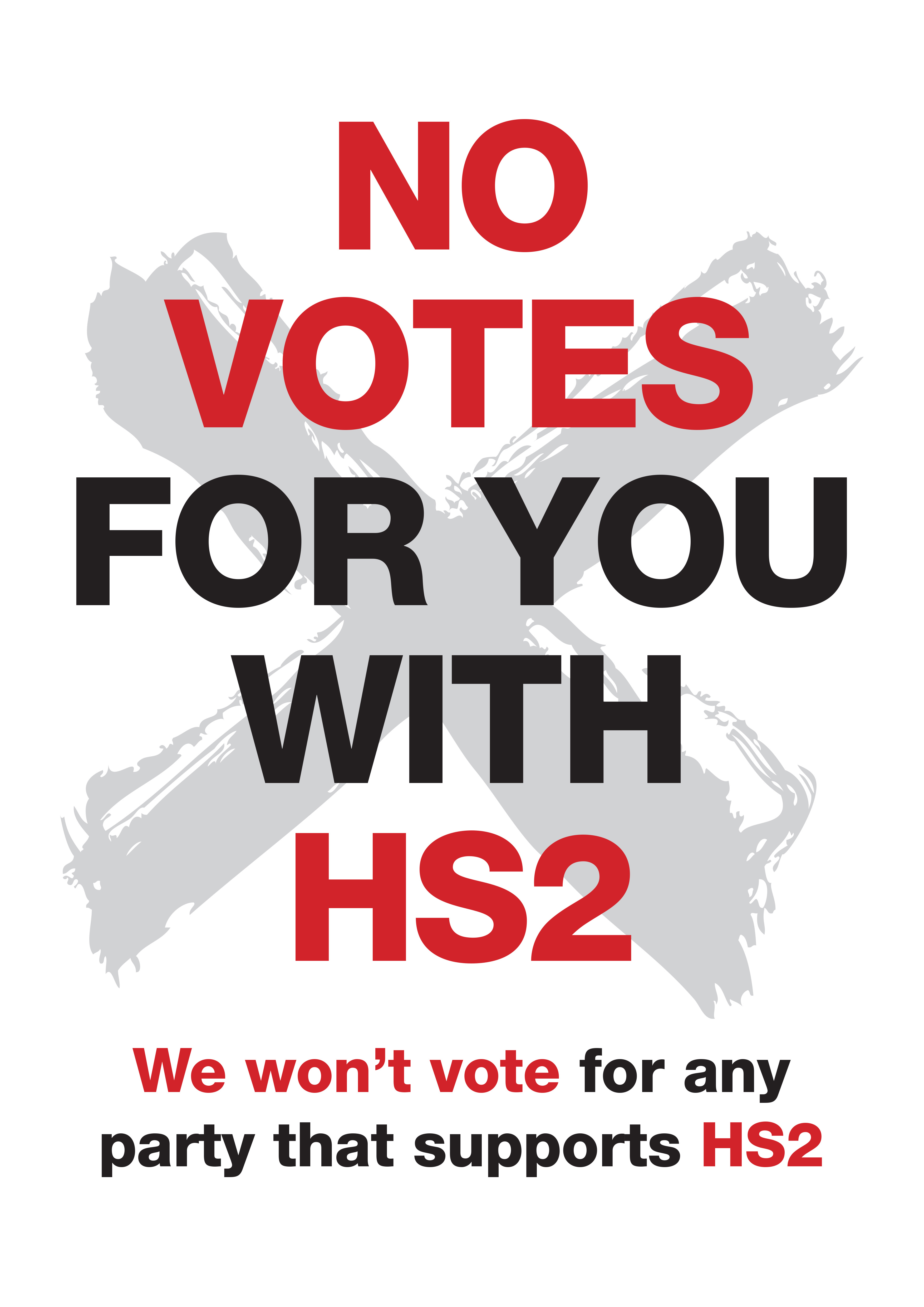 Stop HS2 pre-election poster “No votes for you with HS2”

Stop HS2 has produced various designs of posters and window stickers with the common theme of “We won’t vote for any party that supports HS2”. These are available from the Stop HS2 website to print off, or to buy as window stickers and correx boards for outdoor use.

Under the provisions of the Gagging Act, organisations and individuals engaged in joint campaigns which have the same objective, such as over 100 local actions groups and other organisations working together to get HS2 cancelled, have to provide figures for expenditure which can be interpreted as intended to promote or procure electoral success at any relevant election for parties or candidates who hold (or do not hold) particular opinions or who advocate (or do not advocate) particular policies. 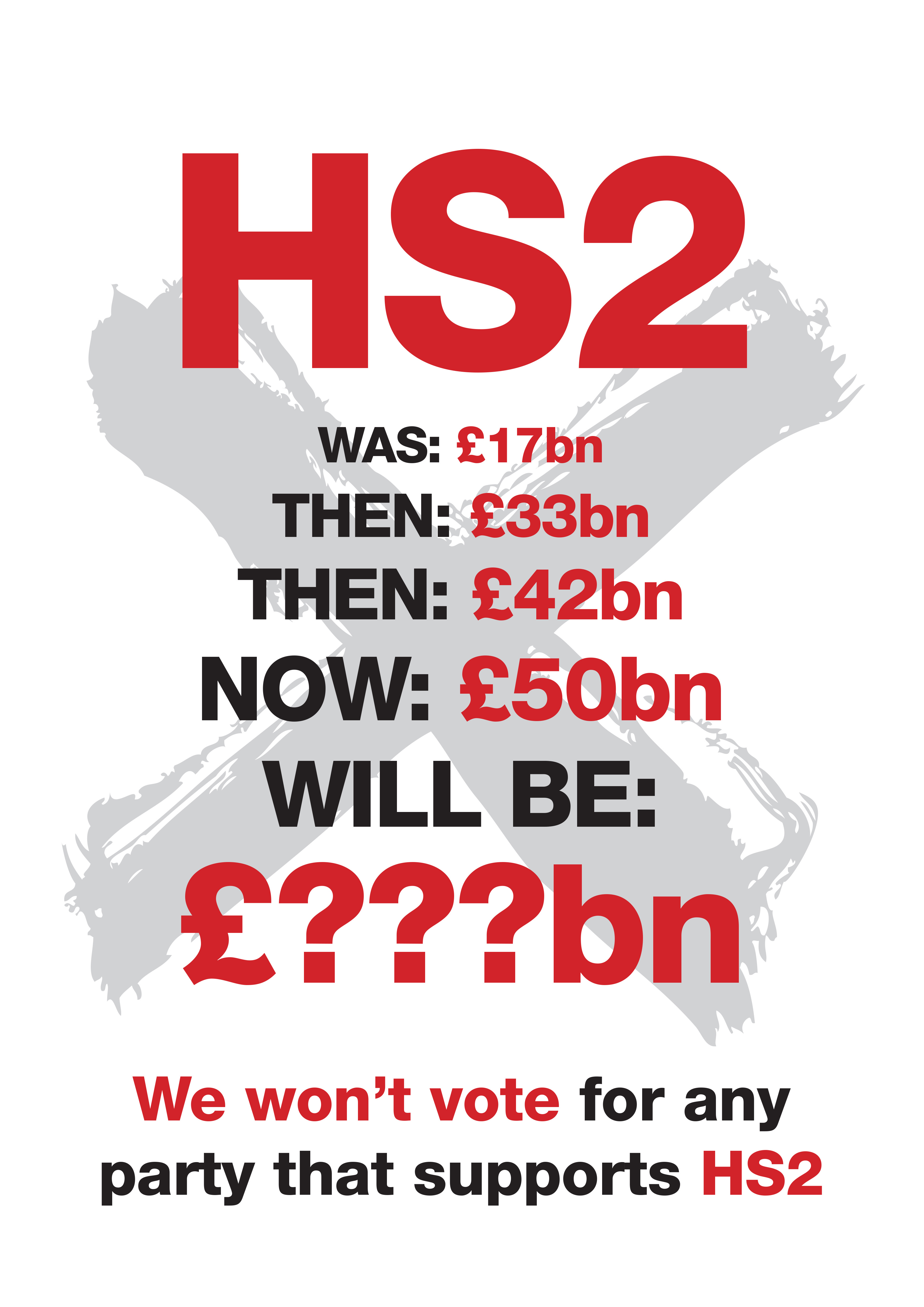 Stop HS2 pre-election poster on the cost escalation of HS2

Expenditure which qualifies includes the production or publication of election material such as: leaflets, adverts and websites, canvassing; or market research seeking views or information from, members of the public; press conferences and media events; transport of persons to any place or places with a view to publicising a campaign; and public rallies or other public events.

There is no question that continuing to campaign against HS2 in the run-up to the General Election will fall foul of this act, as whilst the three main Westminster parties support HS2, The Green Party, UKIP, Plaid Cymru and the NHA Party do not. As such, saying HS2 should be cancelled in the run up to the election will be interpreted as tacitly advocating voting for those parties. However, with so many small voluntary groups involved in the campaign, trying to determine what is regulated expenditure and collating it all within three months would be an impossible task.

In 2011 Cllr Seb Berry (Independent Great Missenden, Chiltern District Council) became the first Independent councillor anywhere in the country elected on a stop HS2 platform.  He overturned a previous vote for the Conservative Party of 71% in his ward.  Cllr Berry said: 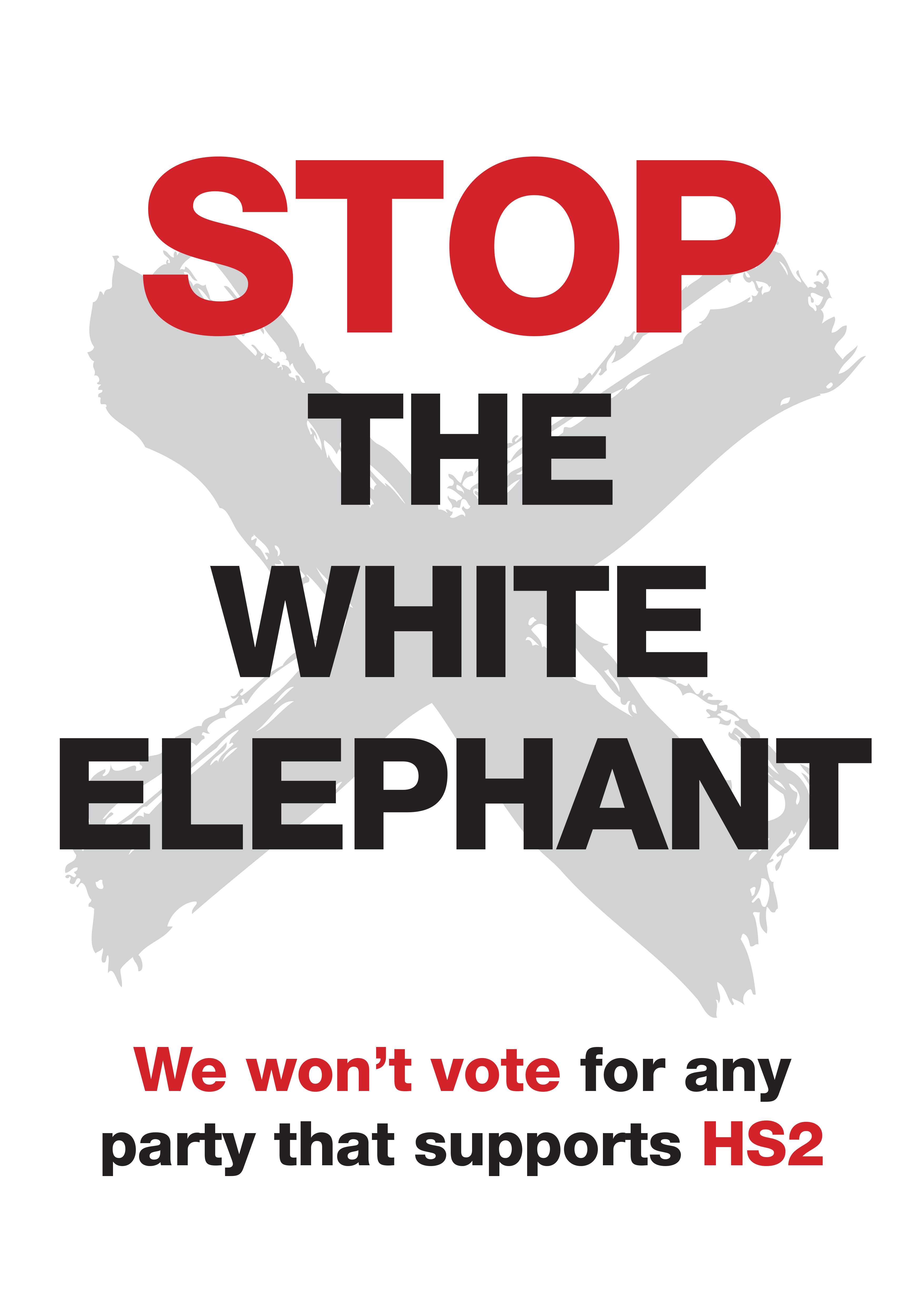 “The result of five years of HS2 is well documented. Shattered communities, rising ill health, people moving if they can, many more stuck in unsaleable family homes, huge upheaval and year after year of grinding uncertainty and misery for the people having to live on the very front-line of the coalition’s HS2 route. With the election now less than two months away, the old adage “don’t get mad get even” was surely never more appropriate.  Stop HS2 is absolutely right to urge voters to take this last meaningful opportunity to inflict electoral damage on the main pro HS2 parties.  Where Great Missenden led four years ago, hopefully many other areas will follow in 2015.”

“You would think that not only it should be the democratic right of anyone to express how they feel about specific policies and political parties, but also that these rights should be even more important in the run up to an election. However, the Gagging Act means the reverse is true. Because many of our supporters wish to make the statement that they won’t vote for any party that supports HS2, the costs of any publicity, meetings, travel and press conferences aimed at that end are supposed to be collated and reported to the Electoral Commission three months after the election. With three national groups and over 100 local actions groups campaigning against HS2, along with countless residents associations, parish councils and other bodies, the idea that all spending could be identified and collated within three months is completely laughable.” 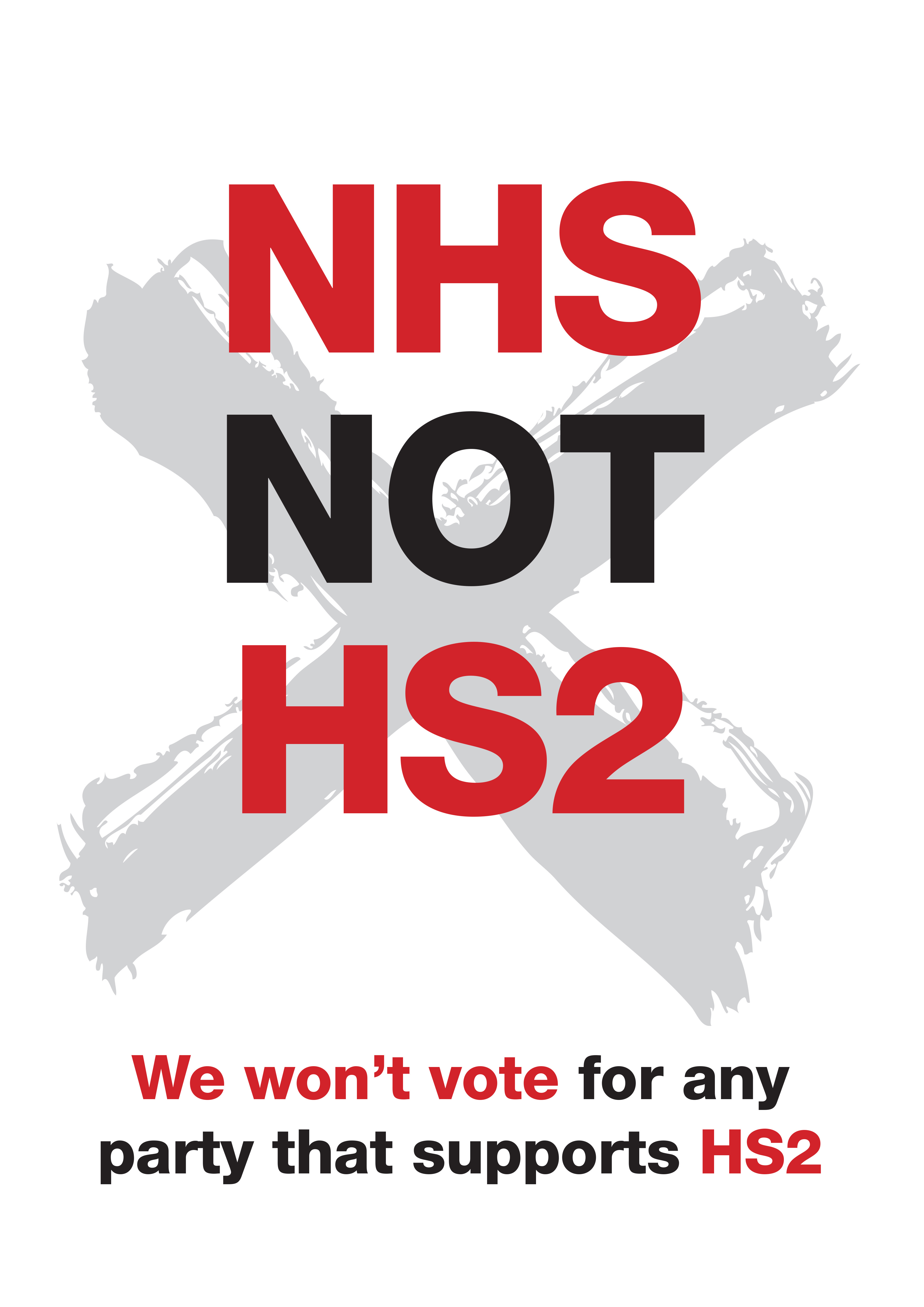 “The law is totally unworkable as it stands, and is aimed at doing one thing and one thing only, trying to silence campaigners who have something to say that politicians don’t want to hear and more importantly don’t want people to be thinking about when they cast their vote. There are tens of thousands of people who feel betrayed by politicians blindly pushing through their vanity project, and they want to say loud and clear that they will not vote for any party that supports HS2. We feel that the fact doing this will mean breaking the law, will only make people more resolute, as we will not be silenced. With so many politicians refusing to listen to common sense on HS2, the only option we have is to punish them at the ballot box. That is what democracy is meant to be about, and after five years of the three main parties ignoring public opinion on HS2, it is all we have left. It will not be taken away from us by an unworkable law aimed at silencing ordinary people.”

“In the five years since HS2 was announced, Stop HS2 has demolished every single rationale put forward for it. The business case is full of holes, the environmental case is non-existent and the costs just increase.  There are much better ways of spending the current budget of £50bn of taxpayer’s money.” 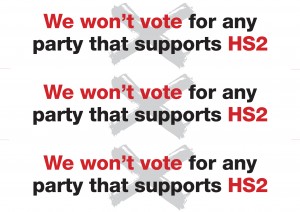 “HS2 is a Victorian solution in the 21st century. It even joins two stations that were open in time for the coronation of Queen Victoria.  Britain should be looking to the future, not the past and putting in the infrastructure needed for driverless cars and digital communications.”

“We call on all politicians to commit to cancelling HS2 as soon as possible.”