Whilst the Department for Transport has justified its decision not to revise HS2 compensation proposals because there was ‘no consensus’ resulting from the 2014 consultation, the analysis of responses paints a rather different picture,  and suggests that responses to the consultation may again have been ‘mislaid’. The proposals which were consulted on in 2014 were the Cash Offer and Homeowner Payment schemes which will be available for home owners on Phase 1 of the proposed route.

According to the Government, these statistics do not represent a consensus.

The Decisions Document published by the DfT said that with regard to the Homeowner Payment proposals, they had decided to stick with the geographical limits proposed, which run to a maximum of 300 metres from the line, because “There was no consensus among those who responded to the consultation as to what the geographic limits should be.” This was despite the fact that 86% (4259) of respondents said the areas were not wide enough, with 55% (2741) saying there should be no geographic limits and that all those affected by HS2 should qualify. 87% (4336) either said they opposed the scheme, or it was inadequate or unfair.

The consultation analysis also raises the question of whether or not Dialogue by Design, the company tasked with handling the consultation on behalf of HS2 Ltd, has again lost responses to a consultation. In 2012 DBD was forced to admit that they had ‘misplaced’ 413 responses to the 2011 Phase 1 Consultation, before later that year having to come clean and say that up to another 722 responses had not been included in their analysis. 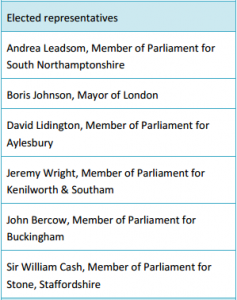 Despite quoting responses from three other MPs in their analysis, these are the only MPs DBD say responded to the consultation.

Suspicions have been raised this time because the DBD analysis document claims that only 5 MPs; Andrea Leadsom, David Liddington, Jeremy Wright, John Bercow & Bill Cash, submitted responses to the consultation.

However, the main body of the analysis document contains quotations taken from the responses of Nigel Adams MP, Cheryl Gillan MP and Christopher Pincher MP, but according to the list of elected representatives who took part in the consultation, they did not actually respond. Whilst in 2012 DBD ‘lost’ the personal response of the Stop HS2 Campaign Manager Joe Rukin, this time they seem to have not included the response he submitted on behalf of the Kenilworth Stop HS2 Action Group in the list of action groups which responded.

“When the Government first said they were sticking with the consultation proposals, we said it was a case of ‘consult and ignore’, but now we now that only one person thought the amount available through one of the schemes was adequate, with only two people saying the other scheme was adequate, the decision to ignore everyone else is nothing short of scandalous.”

“We are absolutely gobsmacked that the Department for Transport have the cheek to claim that statistics like 4039 versus 1 does not represent a consensus. We have always known that when it comes to HS2, the Government refuse to listen to anyone, but the scale of their reticence in this instance is unbelievable. The analysis proves that this consultation on HS2 has been an undemocratic tick-box sham.”

“It would not surprise me if it turns out that consultation responses have been lost again. For all the attention that seems to have been paid to them, we might as well have filled in our responses and put them straight in the recycling bin.”

“This carelessness is just what we’ve come to expect from HS2 Ltd’s consultations, especially those run by Dialogue by Design. It’s entirely unclear whether they have treated the responses from the other MPs, who will have heard many accounts from people affected by HS2, with the seriousness that they should have done. Let’s not forget these are the organisations that lost over 1000 responses from an earlier HS2 consultation.”

“Last week, in the House of Commons, HS2 was called a ‘terrible organisation’ by an MP. While Lord May said he felt he would not trust some of the people who work for HS2 Ltd to mow his lawn let alone build a £50bn railway. HS2 Ltd should be wound up immediately, so that we can look at the real transport needs of the country.”