Yesterday, a couple of months after George Osborne said he wanted to ‘start a conversation’ about HS3, he, along with David Cameron and the chair of HS2 Ltd Sir David Higgins, decided to go up to Leeds for the day and make the big announcement about what they were actually going to do.

Well that’s what everyone thought, but in terms of details it’s all a bit sketchy, to say the least. While there was a lot of talk and fine words about better connections across the North of England, using the names of cities like Liverpool, Sheffield, Hull and Newcastle, there was nothing actually proposed for these places at all, with Monday being the day it was confirmed that besides not getting HS3, Liverpool would not get the HS2 extension they have been lobbying for either.

So the plan for now is to have faster trains between Leeds and Manchester. And that’s about as much of a plan as there is, not even a line on a map. It’s being called HS3, but Sir David Higgins says it shouldn’t be, because it is only going at 125mph. If the plan is for a newly built railway, it would have to go at 155mph to be defined as ‘high speed’, but of course if this were to be an upgraded railway, 125mph would be enough for it to meet the international definition of what high speed is. 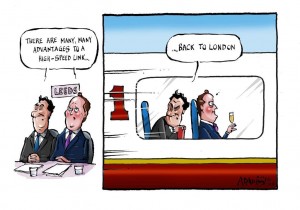 Osborne and Cameron see the advantages of High Speed Rail

Along with speculation about future journey times between Manchester and Leeds, which vary from 26 to 35 minutes, that’s as close to a plan the whole thing comes. There is no route and no timescale. There is no real budget either. At 7am in the morning when £7bn was put to John Humphrys on The Today Programme , he said that figure wasn’t valid as it had only been put forward by ‘one economist’, however, later that morning that figure was being touted by the Prime Minister:

“If we estimate that the cost of HS3 could be the same cost per mile as HS2, this is a six to seven billion pound project.”

The only problem with that statement is that it’s either really terrible maths, or an admission that HS2 costs have gone up, but the Government don’t want to tell anyone.

The cost per mile, at 40 miles for HS3 would be £150m/mile if the total cost was £6bn or £175m/mile if it were £7bn, whilst the 351 miles of HS2 works out at £121m/mile if you look at the £42.6m official cost of construction, or £143m/mile if you use the £50.1bn total cost which includes the trains. So with what the Prime Minister says about the cost guesstimate being quite a way off that, you might think the whole thing had been worked out on the back of a fag packet, if it didn’t seem more likely that the Chancellor has counted it out on this fingers.

So with the HS3 proposal having no plan, no route, no real budget and no timescale, you can only come to one possible conclusion: there is an election coming up! If you weren’t clear about that one, more detailed plans will come out in March, just weeks before the election, just like the HS2 plans did in 2010.