The costs associated with Phase 1 contracts of HS2 have increased by £1.15bn, an increase of 11% since November last year, whilst some costs do not now appear in the budgets for contracts to be tendered on. The biggest increase is that of the cost of the surface route, which has risen 41% from £2.7bn to £3.8bn. Despite it being clear that the overall costs of six contract headings have increased, an HS2  Ltd spokesman told Construction News that this did not reflect an increase in costs, claiming: “Categories have been changed and repackaged to reflect industry feedback and our own ongoing design refinements”.

According to HS2 Ltd, this table does not represent an increase in costs.

Whilst it is true that the original heading of ‘enabling works’ and the original associated £600m cost has now been redistributed into other headings, this does not change the fact that the total value of contracts announced in November last year was £10.65bn, and now it stands at £11.8bn. On top of that £1.15bn increase, an unknown amount needs to be added for Euston station development and ‘some elements of railway systems’, which for reasons best known to HS2 Ltd have been excluded from their figures. All costs are still calculated on 2011 figures, despite the fact the main elements of construction are not due to even start until 2018. 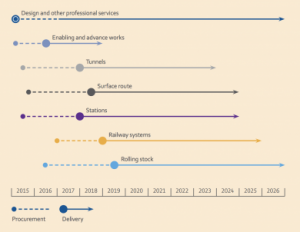 These figures have been released as HS2 Ltd start their procurement process, which HS2 Ltd intend to result in contracts being signed before the HS2 Hybrid Bill gets Royal Assent. Speaking at the HS2 supply chain conference last Friday (17th Oct), HS2 Ltd CEO Simon Kirby told delegates that HS2 Ltd plan to procure consortiums on a two-stage design and build basis before the Hybrid Bill gets has got the final approval from MPs and Lords. HS2 Ltd also intend to start enabling work on Network Rail sites prior to Royal Assent in 2016, with another set of contracts on ground investigation, already out for tender.

On Friday, Kirby told an audience of 700 potential suppliers at an event in London:

“We are looking at early contractor involvement relationships. Before Royal Assent we are planning to do a substantial amount of design activity. We won’t be going to stage two until we have Royal Assent, but we are looking for relationships to form on stage one. We will be ready to begin procurement in 2015.”

“The fact that the costs of HS2 have gone up again will be of no surprise to anyone, but it is a surprise to hear HS2 Ltd trying to make out that what is clearly a £1.15bn increase in costs since last November isn’t actually a cost increase at all. An 11% cost increase over 11 months, which is still based on 2011 prices, is about par for the course for HS2 Ltd. HS2 Ltd have never been able to keep the costs under control, and they never will, the cost of this white elephant will keep on going up and up.”

“This cost inflation is happening at the same time as HS2 Ltd  are seemingly sticking two fingers up at the Parliamentary process. The committee of MPs currently looking at HS2 have consistently said they will take two years to get through petitions, and after that The Lords will still have to have their say. HS2 Ltd clearly don’t give a stuff about Parliamentary process or democracy, as they intend not only to sign contracts, but to actually start work before HS2 would be passed. They are simply out of control, and someone has to stop them.”

“It’s clear that HS2 Ltd are desperately trying to pretend that the costs of this humungous white elephant are under control.  They’ve tried dropping major parts of the project, like links to both Heathrow and HS1. Now they are trying to shuffle the figures round on spreadsheets.  But HS2 is a real cost to taxpayers, and moving the spending between different budget headings is not making them go away.”