Yesterday, the Department for Transport published a series of rail usage statistics. These included details of the busiest ten trains in Spring and Autumn 2013.

Predictably, pro-HS2 twitter users immediately claimed that the data shows that HS2 is needed – except that when you look at the data this is completely misleading.

Look at how many of the most overcrowded rail services are on the WCML https://t.co/XHZC4s74cc HS2 is needed given no spare track caapcity

Sure, the most overcrowded train was the 16:46 service from London Euston to Crewe. But this has already changed, using the solution previously suggested by Stop HS2. The Dft publication goes on to say:

“London Midland recognise that while the formation of this train may not have been the maximum allowed by the route, it was the maximum allowed at that time for the combination of the train path and the rolling stock available to them. The train has been formed of 8 cars since the start of the December 2013 timetable, the earliest point at which this was possible, reducing the load factor significantly.”

What’s more looking at the current 16:46 service to Crewe would suggest that passengers want cheap, slow trains. This is by far the cheapest service – £37 compared to £123.50 for the other five trains to Crewe leaving in the same hour. However this is a stopping train, with 12 calling points between Euston and Crewe: few passengers on the train will be going all the way. 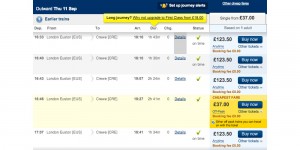 Trains from Euston to Crewe after 16:30

In fact, anyone who wanted to get to Crewe fast could catch any one of four later trains and still be there before the 16:46.