Keri Brennan is a Stop HS2 volunteer who helped run our stands at the Labour Party Conference in 2012 and 2013. This is what she had to say the first time she was there: 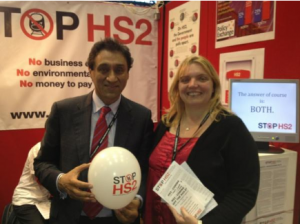 Thanks go to everyone who contributed for their donations that have helped with this important element of the campaign.

Well what a few days we had at the Labour conference and I was only there for half of it. Before we went I was nervous thinking people from Birmingham and beyond would be pro-HS2 and have been fooled into thinking we were selfish nimbys by the vested interests campaign.