Four and a half years after HS2 was announced, the Department for Transport have finally realised that completely demolishing and rebuilding Euston station might just mess up the commute of tens of thousands of people for about ten years. In a superb bit of propagnda, they haven’t actually admitted this, with Patrick McLoughlin preferring a positive spin, saying the Government should “Seize every opportunity to make the most of these once in a generation schemes.”

What he of course means is chucking more money at a project which creates more problems than it solves, by proposing something that at least in terms of the timescales proposed would be impossible. The idea he has come up with is to extend Crossrail to Hertfordshire, which would apparently ‘provide flexibility when building HS2 into Euston’. The proposal would be to extend Crossrail services to Tring, Hemel Hempstead, Watford Junction, Berkhamsted and Harrow and Wealdstone. There are currently up to six trains per hour from Tring to Euston in peak morning hours, so moving them out of Euston would reduce the number of services which would have to be cancelled or cut back during construction at Euston. 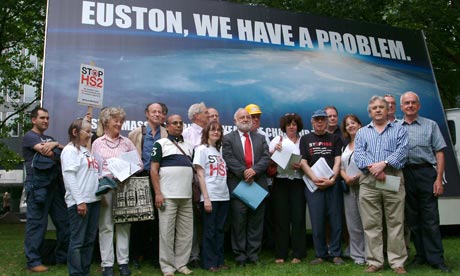 But there is just one problem, construction of HS2 is due to start in 2017, with Crossrail only due be fully operational in 2019. There is no hint whatsoever about how long enabling the current suburban lines, which operate on direct current, to be compatible with the alternating current Crossrail rolling stock would take, or indeed how much this will cost. However it is highly unlikely that adding more work to the Crossrail project will mean it is done quicker or cheaper. There will now be a feasibility study.

Whatever happens, it is a certainty that while these changes would take place to keep trains moving as a direct result of the disruption HS2 will cause at Euston, that the costs will not be added to the overall cost of HS2. The other thing that won’t be mentioned is that part of the supposed need for HS2 is to ease capacity constraints at Euston, so moving these services out of Euston would be of detriment to the HS2 business plan.