Today (18th June), the Government response to the recommendations of the Environmental Audit Committee (EAC) on HS2 has been published, and it will come as no surprise that, like the recommendations previously made by the Transport Select Committee and the Public Accounts Committee, the concerns of an independent group of MPs have been completely ignored.

The nearest the Government came to accepting anything the Committee had said was about the suggestion to have an independent body to monitor the creation of off-set habitats, with the Government saying they will “consider further” the options for Natural England or local authorities having such a role.

In spite of the recommendations of the EAC, the Government:

“Opinion is divided on the merits or otherwise of HS2. But everyone should be united in wanting the environmental impacts of the railway to be avoided or minimised as much as possible. It is disappointing that the Government will settle for no overall biodiversity loss, when it could use the enormous budget for the scheme to provide more gains than losses for the environment. That is a wasted opportunity. If ancient woodlands and other critical habitats will be lost, they should at least be much more fully compensated for than currently planned by the Government’s off-setting system.” 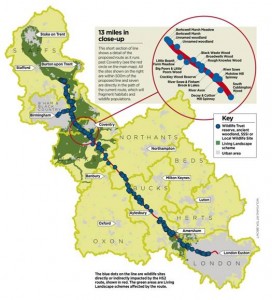 “Yet again, we have had proper scrutiny of HS2 from a group of independent MPs, who have taken their time, examined the evidence and come up with well-thought out recommendations, and yet again they Government have stuck their fingers in their ears and ignored every word. There is no question that the environmental impacts of HS2 are severe, and with only 40% of the route having been surveyed, it is clear that HS2 Ltd have paid little or no attention to them. It is quite simple, the Government just don’t care about the impact of HS2, they want to get it done no matter what the cost.”

“We are shocked at the cavalier attitude to very real environmental concerns that the Government’s response to the Commons Environmental Audit Committee report demonstrates.  Building HS2 will cause immense environmental damage to the areas it blasts through, but this response shows the government aims to put in as little restoration as they can get away with.”

“We are aghast that they can suggest what matters about ancient woodland is how it looks.  Ancient woodland is defined as 400 years old and it is the whole ecosystem, including soil structure and the seed bank. It is simply not good enough to say that some sites should only be monitored for just 5 years.  This is less time than HS2 will take to build.  With no ring fenced money for monitoring environmental protection and HS2 Ltd’s track record, it is highly likely that any budget set aside for the environment will find itself being used to prop up budget overruns elsewhere.”

“With even HS2 Ltd’s figures saying that HS2 will cause increased carbon emissions until after 2086 there is no environmental case whatsoever for the proposed new railway.  The EAC suggested slowing the trains down to reduce carbon emissions sooner.  The Government claimed that slower trains would mean less modal shift, but HS2 Ltd’s current estimates show that there is going to be almost no modal shift from air anyway.”

“It is clear from this response that HS2 is all about having shiny new fast trains, not improving the rail system for ordinary people. HS2 is an environmental disaster, and should be cancelled as soon as possible.”