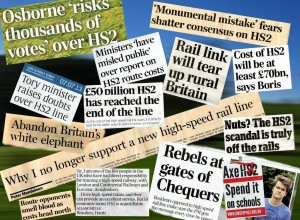 …In an unprecedented verbal assault on the Speaker – traditionally a non-party political role – Mr Burns said that Mr Bercow should resign if he was ‘so concerned’ about the matter, enabling him to vote against it as a backbench MP…

Country Living: HS2: Farmers’ lives are on the line

The NFU and CLA are stepping up campaigns to help farm businesses that will be severely affected by HS2. As well as delivering petitions to Government highlighting their concerns about the HS2 Hybrid Bill- including compensation for landowners and the amount of land taken out of production for environmental mitigation-the NFU is gathering personal stories from those whose livelihoods will be destroyed.

WHAT a red-carpet welcome at the Cannes film festival for Jane Sanchez-Gull who lives in a 1950s tower block on Regent’s Park estate!

Transport Network: Comment: Traffic jams could be the death of HS2

…However I am much more concerned about the traffic noise and disruption from the seven long years of construction work and it is from this that I begin to question the entire HS2 timetable.

Bradford business leader Paul Mackie has been accused of ignoring the views of local companies by hosting an event featuring a director of the controversial HS2 rail project.

Andrew Mason, managing director of Shipley-based Newmason Properties and an avid opponent of HS2, is angry that Mr Mackie, president of Bradford Chamber of Commerce, whose members gave a thumbs down to HS2 in a recent poll, is providing a platform for supporters of the scheme.

I appear to have achieved the rare feat of upsetting the two main HS2 supporting pillars of the local establishment at the same time.

The Government’s controversial £50billion high-speed rail project has been given a damning ‘amber-red’ warning – meaning it is at serious risk of failure.

Spending watchdogs say successful delivery of the flagship 330-mile HS2 line, which will run from London to Birmingham and then onwards to the North, remains ‘in doubt’.

Woodland Trust: Demolishing history, one tree at a time

HS2 is by far the largest threat to ancient woodland we’ve seen, and that’s saying something. Over the last 10 years, we’ve fought for more than 1,000 ancient woods facing danger, including Forest Pines in Lincolnshire and Oaken Wood in Kent, but never anything on this scale. Our latest figures show at least 83 ancient woods could be damaged or destroyed by the scheme.

Spending on consultants working on the first phase of the HS2 project is currently running 86% over budget, government spending figures have shown, with the revelation set to bolster opposition to the £43bn project.

An analysis by Building of the Department for Transport (DfT) HS2 spending to the end of February 2014 has revealed that HS2 Ltd has overshot its allocated £101m budget for four lots of professional services contracts by £87m, taking the total spend to £188m – 86% over budget.

Express and Star: Councillors will fight to retain train services

Councillors say they will put up a fight to retain train services to Stafford if HS2 is given the go-ahead.

Wales Online: Plaid Cymru call for action on HS2 cash as it claims Wales should get £1bn as a result of England-only spending

Wales’ “fair share” of spin-off funding from the first phase of the HS2 rail project could amount to £1bn over the course of a decade, according to analysis from Plaid Cymru.

The party’s chief economic adviser, Dr Eurfyl ap Gwilym, revealed the analysis amid claims from the party that the Welsh Government had not done enough to secure the money with neither of the two main parties in England committing to further “Barnett consequentials” as a result of spending in England.

Recently I had to divert through the congested roads of Kings Heath and Moseley. Whilst inching along, I reflected on the stupidity of Parliament in approving HS2 when for a fraction of the cost, dozens of long closed suburban lines could be reopened, taking away traffic from the highways, and reducing our carbon output.

Birmingham City Council has revealed its Curzon HS2 Masterplan, with all manner of artist’s impressions to show how the 25 year plan will re-shape Birmingham, all kick-started by the arrival of the HS2 high-speed (and high-price) rail-link with London. But is HS2 really a 21st century solution to the problem of greater connectivity between the UK’s commercial centres?Matt Rhodes, Commercial Services Manager for Tamworth-based IT specialists Quiss Technology, argues that HS2 is a retrograde step…

“The flailing attempts to justify the white elephant that is Britain’s new proposed High Speed 2 rail link (HS2) show that value to the public is always at the back of policymakers’ minds. This was painfully obvious this week when MPs were given their latest opportunity to properly debate the costs and benefits of HS2 during the second reading of the High Speed Rail (London – West Midlands) Bill….”

Chronicle: Concern over impact on the North of ‘slower’ High Speed Rail services

“Under Government plans, the high speed railway will go from London to Birmingham, heading in a Y-shape to Leeds and Manchester by 2033. The fast trains then switch down to regular speeds and travel either to Newcastle or up the west coast to Scotland, with Newcastle now becoming simply the end of a branch line.

“Gateshead MP Ian Mearns, who sits on the House of Commons group overseeing the London to Birmingham high speed work, said he had warned his own party’s front bench team that something will have to change if the North East is not to lose out.”