Since first being announced in 2010, HS2 Ltd have always planned to have 18 trains an hour each way on Phase 2. Numerous questions have been raised about whether this was technically feasible, but HS2 Ltd claim to have looked into it, and that it was definitely doable.

However, last week David Higgins, chair of HS2 Ltd, told a meeting of MPs that they no longer expect to run 18 trains per hour each way.

Q83 Steve Baker: But is there anywhere on the network that operates at 18 train paths per hour?

Q84 Steve Baker: What would you say is the practical technological limit?

Pierre Messulam: That is a very difficult matter. I am in charge of some of the ERTMS programmes for SNCF. We have had a discussion in France about this capacity. It is a complex question. You have to consider the braking power and acceleration of the train, and also the stop pattern. The more often you stop, the bigger the impact on capacity. Ideally, you would say you would go from A to B without any stop. Today, we think that with ETCS or ETMS you could have about 15 to 16 trains per hour.

What’s more HS2 Ltd claim to have analysed whether these numbers are possible.  In the January 2012 document “High Speed Rail: Investing in Britain’s Future. – Decisions and Next Steps”, which announced the results of the 2011 consultation, HS2 Ltd claimed

p84 “5.5 Some respondents raised doubts about whether 18 trains per hour in each direction is achievable on the full Y network. As a result of these concerns, HS2 Ltd undertook additional analysis and independent verification to calculate in more detail the maximum capacity of the lines, which can be found in its Review of the Technical Specification for High Speed Rail in the UK document. On Day One services, when London – West Midlands infrastructure is brought into use, there will be 11 trains per hour in the peak and 10 trains per hour off-peak, with a maximum line capacity of 14 trains per hour. By the time the full Y network is operational, the majority of services running on the HS2 infrastructure will operate only on the high speed network. Coupled with the use of advanced network management tools to control real-time train operations, this means that running 18 trains per hour would be entirely feasible. Furthermore, by using a fleet of trains that are the same design and construction and with the same acceleration and braking characteristics, the route would become easier to operate than a route with mixed traffic, such as the current West Coast Main Line. Therefore, we are confident that 18 trains per hour is a robust assumption.” 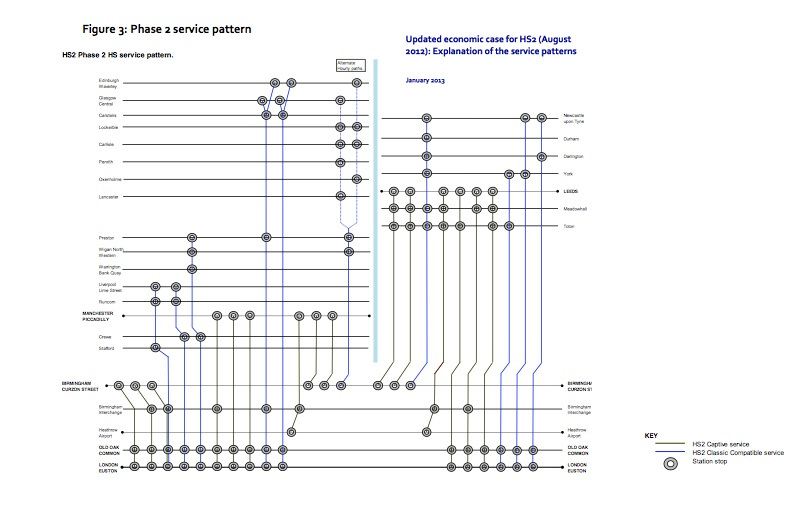 It’s not clear what triggered the change of plan. It’s not the removal of the HS1 link – as the service pattern diagram shows, HS2 Ltd have never included those trains in their plans.

But what is clear is that HS2 is becoming even more of a White Elephant of over promised assumptions and undeliverable promises.