Four years after the original announcement of HS2, actions groups and communities must reconnect with all the people affected by HS2, whether directly or indirectly, says the Stop HS2 campaign group in an email sent today to 40,000 campaign supporters, which also asked for help in funding the Stop HS2 campaign manager, Joe Rukin.

Action Groups, Parish Councils, Residents Associations and other Community and Special Interest Groups have done a great job alongside the national campaign over the last four years, but it is now time to make sure that all the individuals who have supported the campaign over the last four years are re-energised now that the time for preparing petitions to the Hybrid Bill Committees is coming up.

Just a couple of weeks ago, over 20,000 people responded to the HS2 Phase 1 Environmental Statement, and it is hoped a large chunk of them will send in written petitions, which are effectively a complaint about HS2 with a proposed solution, to the HS2 Hybrid Bill Committee, when the time comes. The period in which people can submit written petitions does not start until the second reading of the HS2 Phase 1 Hybrid Bill, which will be at the end of April 2014 at the earliest.

However, all groups and individuals should be thinking about submitting petitions, which will give them or their representative the right to be heard in front of a Parliamentary committee now. Placing a written permission costs £20. Petitioners are meant to be ‘directly affected’ by HS2, but not one of the petitioners to the Crossrail Bill were challenged, including one from Norfolk, despite the fact Crossrail is a London based project.

“Next week we will have the sixth relaunch of HS2. It shouldn’t take a genius to realise that if something is any good, it doesn’t need relaunching six times, and neither would it need Tony Blairs former spin doctor, who has just been taken on to try and do what he and HS2 Ltd have always tried to do: con the public. It has been a long hard slog for the last four years, and while the Stop HS2 campaign is clearly winning the argument, we have not yet won the war.”

“We now need another big push over the top. Heartened by the fact over 20,000 people and organisations have just responded to the mess that was the Environmental Statement Consultation, we must now try and covert as many as possible of those people into petitioners against the Hybrid Bill. Anyone who is affected by HS2 can petition against the Bill, and I would say that everyone across the country is affected. Anyone who has evidence accepted, and with Crossrail no-one who submitted evidence was rejected, has the right to appear in front of a committee of MPs, and later a committee of Lords and tell them what they think of HS2, and we hope that there will be thousands willing to spend the £20 needed to tell them what for, or at least give us the authority to do it for them. We will be issuing advice for people on how to petition when the time comes, but the important thing now is for people to know that they can petition, that they should petition, and that the help will be out there.” 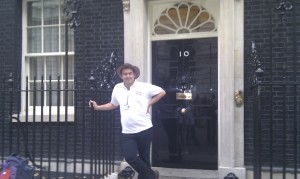 At the same time, the Stop HS2 campaign has launched a funding appeal for the campaign manager, Joe Rukin. While Stop HS2 have had many funding drives in the past, none have specifically been for the campaign manager, who is not employed directly by Stop HS2, but works on a self-employed basis, paid directly by individuals and actions groups. However, many payments have come as one-offs, not the regular consistent funding which is needed, and for the month of December, his wages only totalled £380, forcing him to reconsider his position. Unlike many of the volunteers in the campaign, Joe Rukin works full-time for the cause and cannot rely on family members to support him.

As a result, the campaign is hoping to secure standing orders of £10 from 100 people to secure his ongoing services. Mr Rukin, who was the only campaigner of any sort leafletting outside the Liberal-Democrat spring conference in York last Sunday, has been a constant in the campaign for the last four years, being a founding member of Stop HS2 and coming up with the name for the national body, along with the well recognised logo and slogan.

Besides being the primary press spokesman for the campaign, he has organised and chaired events in Parliament, delivered various strategy plans, liaises with internal and external bodies clocking up over 5,000 miles in 2013, and following recently giving evidence to the House of Lords committee which was fundamental to the recent extension to the Environmental Statement consultation, will be giving oral evidence to the Parliamentary Environmental Audit Committee next Tuesday. If he stays on, it is anticipated that he will appear in front of the Hybrid Bill Committee as the representative of various individuals and groups.

“Joe is very good value. Look at the £50-75k that HS2 will pay some corporate clone to do PR. You’d spend £5 of a bottle of plonk from Tesco a week without really thinking about it or buy a couple of pints in a pub. Do the same for the sharp end of the campaign and be grateful he has the energy and commitment.”

For information on how to set up a standing order to support Joe Rukin, email info@stophs2.org.