From the Woodland Trust.

With the imminent release of the draft Environmental Statement for the London to Birmingham phase of HS2, the Woodland Trust sets out its expectations for the document.

What is at risk?

On the phase 1 stretch of HS2 from London to Birmingham, at least 21 ancient woods, covering a combined area of 409ha, will suffer direct loss and a further 12 are at risk from noise, vibration and further infrastructure such as roads. Three ancient trees, habitats in their own right, will also be lost with another 16 lying within 200m. 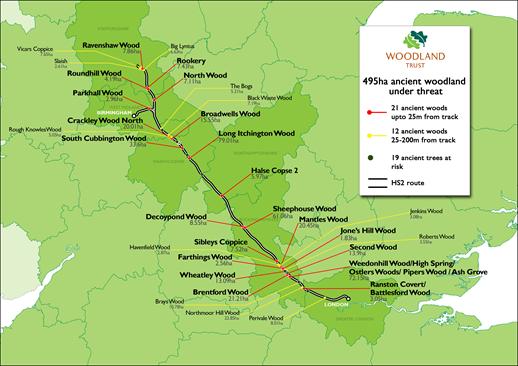 If a decision is made, as has been muted, to increase clearance from the edge of the track to 80-100m, this could raise the number of directly threatened woods on the phase 1 stretch to at least 27, covering a combined area of 459ha (almost twice the size of London’s Olympic Park). The number ancient trees lost would increase to 6.

“HS2’s credibility as a ‘green’ transport measure is seriously compromised by the fact that the route will have a detrimental impact on ancient woodland. We expect the Environmental Statement to recognise each area of ancient woodland and to show that every possible strategy has been taken to minimise that impact.

“It must be understood that there can be no mitigation for ancient woodland loss – it is irreplaceable – and we also expect to see this acknowledged in the Environmental Statement. New planting, although vital to mitigate against the impact of HS2 itself, will never have the same biodiversity value as ancient woodland.

“In the event of any ancient woodland loss – which we are still fighting against – we expect the Environmental Statement to acknowledge the need to put in place comprehensive and proportionate compensation measures that also take into account the local value of ancient woodland. We will push for all compensatory tree planting for ancient woodland loss to be implemented at as high a ratio as possible, and for it to be located in areas where both local people and wildlife will most benefit.”

The preferred route for the entire HS2 line from London to Manchester and Leeds will cause loss or damage to at least 67 irreplaceable ancient woods.

Ancient woodland is rare, irreplaceable and makes up one of our richest and most important natural habitats – 256 species of conservation concern are associated with it.  Just 2% of the UK is covered in ancient woodland and much of it is fragmented. To ensure we build resilient landscapes resistant to disease, we must protect what we have not only by retaining it, but also by continuing to plant to buffer existing woodland and join up habitats across the UK.

For more information or to download an HS2 community toolkit, visit: www.woodlandtrust.org.uk/hs2

Ancient Woodland is land that has been continuously wooded since 1600. The unique undisturbed soils and ecosystems found in these sites form the UK’s richest land habitat. It provides a home to a host of rare, protected and threatened wildlife – 256 species of conservation concern are associated with ancient woodland; species that are slow to react to change, find it difficult to adapt, and are not mobile enough to move to other locations to survive. Ancient woodland now accounts for just 2% of our land area, a loss fuelled by the fashion for planting fast growing conifers in an industrial age. Once destroyed, it can never be replaced.