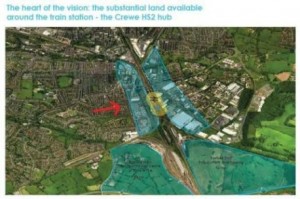 While it’s been known for a while that HS2 has a devastating effect on sports such as equine pursuits, angling and golf, the effect on football so far has been pretty small. Up until now, all that was confirmed was that Aston Villa would lose their training ground, but this week The Crewe Guardian published a July 2012 report saying that Crewe Alexandra’s Gresty Road ground had been defined as ‘land available’ for a HS2 hub in the town.

Given that Gresty Road is right next to the west coast mainline and Crewe station and has been for 107 years, it may not be a surprise that their nickname is ‘The Railwaymen’, but what may be a surprise to many football fans is that it wasn’t HS2 Ltd, but Cheshire East Council who defined their home as a prime site for a new ‘urban centre’. While the council has been willing to suggest that Alex would have to vacate their ground if plans for a HS2 ‘superhub’ went ahead, there has been not thought as to where they would go instead, and council leaders reaffirmed their support for the hub at a meeting this week.

The report from last year, titled ‘From rail town to high speed city: a vision for Crewe’, shows a 150 acre plot earmarked for a re-developed ‘urban centre’ around the existing station for housing and office blocks

The full report can be viewed here.

email
Tags: News
News
4 comments to “Railwaymen to be Railroaded by HS2?”