The think-tank behind the original Conservative high speed rail proposal has promoted a report saying HS2 should be scrapped, at the same time as it was revealed a critical review of the project has been delayed, because it HS2 Ltd expect to fail it. According to the HS2 Ltd Corporate Plan, passing ‘Review Point 1’ was considered a necessary step before tendering on contracts could begin, despite the fact George Osborne started this process in China last month. 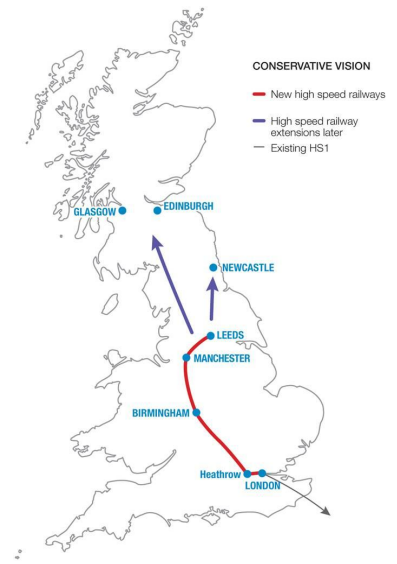 The Bow Group drew up the original Conservative proposals for HS2 in January 2010, which intended to connect HS2 to HS1 and take the line via Heathrow Airport to Birmingham, with a single line continuing on to Manchester and then Leeds. In March that year, the Labour Government announced a similar scheme, but opted not to go past Heathrow or connect to HS1, with their proposal splitting North of Birmingham with separate branches going on to Manchester and Leeds.

In 2012, after the Conservatives and Labour swapped positions on the route for HS2, the Bow group was still pushing the Heathrow route, with Research Secretary Richard Mabey saying: “Rarely in politics do you have u-turns by both Labour and the Conservatives. The two major parties have supported the Bow Group route for HS2, just at different times.”

Now it is the Bow Group who have done the u-turn, and one rather bigger than either of the main parties. They are now saying that HS2 should be scrapped altogether, with the funding used to reopen lines closed in the Beeching cuts, saying this would cost a fraction of building one high-speed route to “already well-connected cities”.

“Now is an ideal time for the government to take positive action that can transform transport, making use of existing infrastructure and therefore cutting capital costs.”

“At a time when the focus is on value for money, government should be looking to fully utilise the country’s existing resources, rather than pouring funds into major schemes such as High Speed 2 which many experts feel will be ineffective.”

“Reviving existing railway lines has the ability to improve lives for people across the whole country, and rather than connecting major cities that already have links, bring effective public transport to areas that have been cut off from the transport grid for decades.”

This report from the Bow Group has proven to be timely, as it follows on directly from the revelation that a vital review of HS2 has been delayed, because of fears it would fail. HS2 is meant to face three Review Points, which if passed would mean the progressive releasing of powers and authority from the Department for Transport to undertake procurement and construction activities. However, HS2 Ltd have confirmed that the first of these reviews, which was meant to take place this year, will not be undertaken until the spring.

“We expect to pass Review Point 1 toward the end of 2015 and demonstrate that we have the organisational maturity required to move onto the next stage of the Programme, specifically gaining the powers necessary to commence tendering for Phase One delivery contracts.”

And that: “Passing these Review Points is a priority for the success of the Programme.”

Despite the fact passing ‘RP1’, was originally seen as necessary to gain the powers to start tendering for Phase 1 delivery contracts, George Osborne chose to start that £12bn tendering process at the end of September in China. The Chancellor was widely criticised at the time for launching the tenders before HS2 receives Parliamentary approval, but now it turns out he chose to do this before HS2 Ltd had been deemed competent enough to handle the contracts.

It is of no great surprise that the review has been delayed as over the last four years HS2 has been consistently rated as ‘amber-red’ by the Major Projects Authority, meaning: “Successful delivery of the project is in doubt, with major risks or issues apparent in a number of key areas. Urgent action is needed to ensure these are addressed, and whether resolution is feasible.”

The Stop HS2 Campaign is currently awaiting a tribunal concerning the release of the November 2014 MPA report on HS2, which HS2 Ltd Chairman Sir David Higgins admitted raised 75 complex questions. Bizarrely, HS2 Ltd have claimed that they have not been allowed to see the latest MPA report on their project which was produced this summer.

A senior rail industry source told the Independent on Sunday: “It looks as if this review has been deferred because HS2 Ltd is not ready. They fear failing the review and that would undermine their credibility. On the government side, a failure would have also had implications over their capability of monitoring the programme.”

“We said George Osborne was premature when he launched the tendering process for HS2 contracts in China because the project hasn’t been passed by Parliament yet, but now it turns out he did it before HS2 Ltd are even ready to handle the contracts. It is no surprise that HS2 Ltd fear failing their review, as they’ve been told by Government experts for the last four years that they are in danger of failing, and have done nothing to fix this. We cannot understand why HS2 fear their credibility being undermined, as they have never had any credibility.”

“Instead of blindly backing this gargantuan white elephant and it’s spiralling budget, Osborne and company should listen to the Bow Group, who after years of backing HS2 have had the sense to realise there are a host of more worthy projects out there which would benefit more people, and could be delivered for a fraction of the cost of HS2.”