This is a guest post, originally published on Ealing Against HS2. They are in need of a new committee: if you are able to be either chair or secretary could you contact Alberta as soon as possible.

The focus of the campaign against HS2 in Ealing has been largely on the impact that its construction and operation will have on our daily lives. However there is another serious concern and that is the effect that HS2 will have on our natural environment. 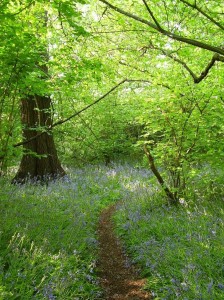 Ealing is one of the greenest of London’s boroughs, with natural spaces such as Horsenden Hill. It is home to the Selborne Society, the oldest conservation society in the UK, responsible for Perivale Wood which is next to the proposed route. In its response to the HS2 consultation the Society raises concerns about the impact on the tranquillity of the reserve which rare birds such as the hobby are known to visit. Every Easter the reserve is opened to allow visitors to view the extraordinary bluebell display.

In its “position statement” on HS2, the London Wildlife Trust states that it is “concerned about the adverse and irrecoverable impact on wildlife”, pointing out that it could affect 20 wildlife sites, including Perivale Wood, between Euston and the Colne Valley before entering Buckinghamshire. The statement also makes clear the Trust’s concerns for “isolated patches of habitat” which it believes will be under even greater pressure if HS2 goes ahead.

Within the London Borough of Ealing the Trust believes that HS2 will impact negatively on these patches, which include narrow areas alongside tracks. It refers specifically to the railway land from Northolt to Acton. These are home to a wide range of insects, mammals and reptiles that need to be able to travel along this “green corridor” in order to survive. The small “in between” areas in the landscape alongside our railways may seem scruffy and untidy to some but they are absolutely vital to the wildlife we take for granted. The Selborne Society expresses concern about pasture adjacent to Perivale Wood which it believes cannot be repaired following construction. “Ancient grassland cannot be replaced and damage cannot be mitigated to any extent. It is therefore essential that there is no land take for the railway.” HS2 will erode or destroy these areas altogether. Already under pressure, the things that live there now will have nowhere else to go.

Hanger Lane Roundabout and Acton Cemetery are also mentioned. Almost hidden from view at the Hanger Lane Gyratory System, one of the busiest traffic hotspots in the UK, are areas of grassland and scrub as well as some formal planting. The value of cemeteries as wildlife habitats has been recognised for some time. Acton Cemetery is the site of burials from the 19th century to the present day and will be above the tunnel from the Old Oak Common Interchange in the neighbouring borough.

Other, “accidental”, nature reserves are the gardens that back on to the route. They are at risk from noise and construction work (HS2 Ltd wants to “borrow” some) but others will disappear altogether. Homes at risk of demolition in Acton back on to Old Oak Common Lane where shrubs, trees and ferns hang over a retaining wall. This pocket of greenery provides an increasingly rare foothold in an urban landscape – we need to encourage these rather than destroy them.

Those behind HS2 argue that in order to prevent the global warming that threatens our environment we must go ahead with large infrastructure projects such as high speed rail. Those against it will support the opinion of the London Wildlife Trust, which states that “The principles of sustainable development must not be achieved at the expense of biodiversity and the natural environment.”