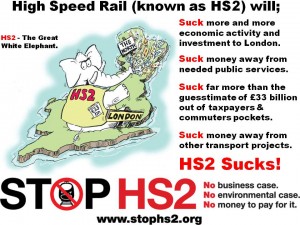 HS2 Sucks; The message taken on The Great White Elephant Hunt on the side of an Advan, kindly on loan from Nikki Sinclaire MEP.

STOP HS2 will this week embark on part one of ‘The Great White Elephant Hunt’, visiting 15 towns and cities in the East Midlands & Yorkshire, delivering a simple message, ‘HS2 Sucks’.

Starting at the Bombardier factory at 8am on Wednesday 24th August, the tour will include;  Nottingham, Mansfield, Chesterfield, Worksop, Sheffield, Rotherham, Doncaster, Barnsley, Wakefield, Harrogate, Leeds, Bradford and Halifax, before completing in Huddersfield on Friday 26th.

“There is very little known about HS2 outside the area effected by the initial route, and most of what has been said has come solely from  big business and the politicians in their pockets. People have been told that HS2 will be this ‘magic wand’ that is going to cure the north-south divide and bring prosperity and jobs, when the reality is that it will suck more investment and jobs to London, it will suck money out of public services, it will suck money out of transport the transport projects that people need and it will suck up far more than the £33 billion pounds that is being quoted at the moment. Quite simply, HS2 Sucks. We have seen the plans and we have seen the mistakes and the lack of any proper environmental assessment, all of which will jack up the costs and you have to remember; that £33bn is just the track, it doesn’t include VAT or loan interest payments and of course the cost of the trains themselves is an extra.”

“The reality is that HS2 is little more than a fast train for fat cats, and is the most expensive way possible of solving one of the least pressing problems on the rail network. The fact is that north-south capacity problems could be solved now, simply by adding more carriages to trains, which could be built in the UK, opposed to HS2 trains which will be made in China or Germany, long after the last train factory in the UK has been allowed to close. This is why we are starting The Great White Elephant Hunt at the Bombardier factory in Derby, because we are not against trains, simply against the ridiculous waste a vanity project like HS2 represents when there are far more important things to be thinking about right now.”

“We have always said that HS2 has no business case, no environmental case and most importantly at this time, there is no money to pay for it and better things to be supporting and spending money on. As such we have chosen as set of venues which reflect the problems the UK faces and which need addressing today.”