Are HS2 Ltd lying to everyone by using contradictory maps in public consultation?

Ever since I found a copy of the HS2 Ltd leaflet; ‘High Speed Rail, Investing in Britain’s Future. Have Your Say’, which blew a hole in Chief Engineer Andrew McNaughton’s assertion that everyone was getting exactly the same information during the consultation, I have been trying to decide which map is the real map for HS2, the one in that leaflet, or the one being used in the main consultation documents. The discrepancies between the two maps, both in documents encouraging people to respond to the consultation, may seem like little things but they represent a difference of billions of pounds, and a completely different proposition for how and when HS2 is going to get to Scotland, which would mean years more construction with that being ‘Stage 3’ of HS2.

As you will see below, the map as printed several times in the main HS2 Ltd consultation documents shows a solid grey line going north from both Manchester and Leeds, connecting up to Scotland on both sides with HS2 trains ‘running on’ on existing tracks. This suggests, to me at least, that once HS2 has got as far as those cities, the tracks will be immediately joined up to the East and West Coast Mainlines and HS2 trains will be able to ‘run on’ to Scotland at no extra cost. 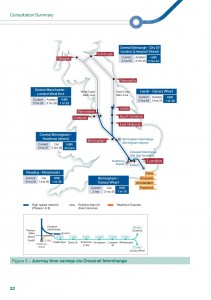 Map on p22 of the consultation summary document

Next is the map printed in ‘High Speed Rail, Investing in Britain’s Future. Have Your Say’. In this, besides the link to Liverpool, this idea of ‘running on’ is gone, with the map taking on a more familiar feel and looking more like it did last March. The dotted grey line in the West is the only one to make it to Scotland, with another Y branching off to the two principal cities, whilst in the East, the line only reaches as far as Newcastle. This dotted line represents ‘possible extension of the core network’, suggesting no there will be no immediate link past Manchester and Leeds and that any future link would need more money to build it. 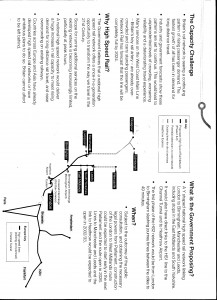 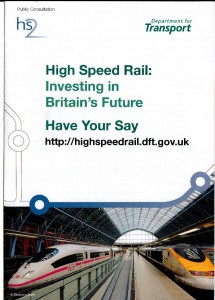 I’m sure this is something that HS2 Ltd, advocates and the DfT will try and suggest is a minor thing, something that doesn’t really matter. Maybe they will say it is mistake, or an option for the future. Maybe they’ll say it was something that was inadvertently carried on from previous documents, which of course it isn’t as the previous version of that second map which was floating around last March, had the guts to show that HS2 is just about getting to airports with a ‘Teesside Interchange’ about 40 miles short of Newcastle, oddly enough round about dead on where Tees Valley airport is.

But this is no minor error, as besides maybe letting the cat out of the bag, this second map with a second set of options, completely invalidates a consultation which asks in question two; “Do you agree that a national high speed rail network from London to Birmingham, Leeds and Manchester (the Y network) would provide the best value for money solution (best balance of costs and benefits) for enhancing rail capacity and performance?”.

There are two different proposals being presented which will influence how people, especially those in Scotland and Newcastle, respond to that question in the consultation. Whilst the Y they are talking about at this stage would only go as far as Leeds and Manchester, the consultation map shows that for the £32.2bn, trains will immediately ready to go up to Newcastle & Scotland as soon as ‘only’ that money has been spent. But in this new map, which is being given out during the consultation and is intended to help people respond to that consultation, that won’t be the case and more money will have to spent to get further north.

It’s just another one the list of reasons why there should be a public inquiry and it is definitely one to save up for the Judicial Review. The two maps show two completely different propositions. One will cost billions of pounds less than the other and would be operational sooner. This is completely unreasonable and completely farcical.

So the question has to be, which is telling the truth and which is the spin that’s intended to get people to think HS2 is a great idea?

Without cynically coming to the immediate conclusion that the ‘fake’ has to be the better looking, cheaper to build map (especially as that’s the one printed in the consultation summary next to the questions), I tried to see if there was an obvious answer to this question. After a while I gave up and turned to another question; how exactly will wider trains run on current tracks without whacking bridges or smacking passing trains? The answer is of course ‘they won’t’, and that answer gives us the answer to the ‘which map’ question too.

Whilst journey times between Britain’s major cities already beat European rivals and Pendolino 2 trains could actually fulfil the 155mph in the 1996 EU directive on what ‘high speed’ is with a bit of work on the signalling, what you don’t get without building a whole new railway line is what the EU demands; ‘A European High-Speed Rail Network’.

The problem for Britain is the width of the carriages. The European Loading Gauge is wider than ours, meaning their trains are too wide to fit on our platforms or squeeze under our tunnels and bridges. This is clearly stated in consultation as the reason why HS2 would be too expensive to get into Birmingham New Street. It is also true that if we start using the European loading gauge for freight this will not fit on the current lines, which might explain what happens with HS2 for the six hours overnight when there are to be no passenger services, especially with the central Birmingham station being next to the rail freight depot. It is solely because of this width issue that the only way Britain can comply with the EU directive is to build an entire new set of tracks. I won’t use the words ‘national network’, as that rather overstates what HS2 is. And it’s the platforms which will serve HS2 that surely give us the answer to which map is the real map.

You can see the difference in width represented below in the plan of what Euston station will look like, after the eight years it will take to completely rebuild it. Every single track and platform will be moved, the station being made wider and longer, with track buffers finally ending up where the bus stops currently are. Just in case you were believe the hype that this might not too much disruption, once again the whole thing will have to be rebuilt and the tracks will have to drop six feet below where they are now. If only HS2 itself could go six feet under! 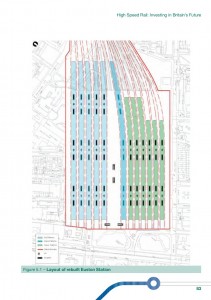 Euston, after re-modelling for HS2

The main consultation document (pg 81 para 5.5) explains what you see in that map; “The single-deck proposal would locate the 10 high-speed platforms alongside 14 classic platforms, some of which would be capable of being used by classic compatible services.” The darker blue block to the right of centre shows that just 2 of those 14 platforms will be for classic compatible services. So that’s two platforms for trains that ‘run on’ and ten platforms for ones that go solely on the new HS2 tracks.

First of course you have to remember that Euston won’t serve Europe. All the trains from Euston will be internal services, with trains to Europe coming in from the North, and switching across at Old Oak Common on their way to St Pancreas & HS1. So if we go back to the main consultation map the top, it suggests that trains going onto Scotland and Newcastle on the East and West Coast Mainlines won’t stop at Leeds or Manchester as the lines will branch off before then. So that would mean if the main consultation map is correct that all trains with final destinations of Edinburgh, Glasgow, Liverpool and Newcastle are setting off from just 2 platforms at Euston. There would then be 10 platforms for Old Oak Common (change here for Heathrow), Birmingham, Manchester, East Mids, South Yorks and Leeds.

Now does that sound right to you, or does it seem more likely that those two ‘mixed use’ platforms will mostly have HS2 trains and will only need classic compatible trains for getting to Liverpool?  You see, those pesky bridges, platforms and tunnels would so get in the way if you want to have trains direct from Scotland to Europe on the current tracks, so surely the real agenda is represented by the map in the leaflet, with its ‘possible extensions to the core network’ on the back of the 1996 EU directive for a ‘High speed network’?

I’m sure there’s a chance an advocate will appear and say that this is just the sort of misinformed scaremongering you have to expect from the likes of us, but the question has to be asked and maybe we should just wait and see what excuse HS2 Ltd come up with for the stone cold fact that one way or another, they are misleading the public on this issue.