Felling is happening at record speed in Jones’ Hill Wood and this is our last chance to stop it. We need you to help us.

Court papers have been lodged challenging the licensing decision and regulatory failure by Natural England at Jones’ Hill Wood, an ancient woodland currently being destroyed by HS2. These papers are marked as urgent and the judge has been appealed to suspend felling until the case is heard. HS2 are determined to do as much damage as possible before a Stop Order comes in.

HERE’S WHERE YOU COME IN

The Jones’ Hill Wood Earth Protectors have launched a petition to Andrew Stephenson, the Minister for Transport, to urgently suspend felling until the court can decide if the work is legal or not. Please sign it and share widely. Public opinion and exposure is key. We’re close to reaching 3,000 signatures, [it’s now over 5000] but we need at least 10,000!

Alongside this, we are launching a mass email campaign to Andrew Stephenson (mailto:andrew.stephenson.mp@parliament.uk). Please email the Minister for Transport demanding that he halts destruction at Jones’ Hill Wood until the court case is fully heard. Keep the email concise and personal. You can include the following information:
Most importantly, keep your email personal and express how you feel about the heartless destruction taking place right now. Ask that it is STOPPED IMMEDIATELY. 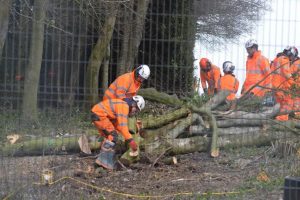