While direct action is ongoing in a number of places along the HS2 route, at Great Missenden locals and activists have got a reprieve until 2020.

As part of HS2 preparation works the plan had been to widen Link Road and Frith Hill in Great Missenden, including cutting down nine mature trees. In response, on 13th October the Great Missenden Save Link Road Trees group was formed, by local people, businesses, and others including members of Extinction Rebellion.

The camp itself started a couple of weeks ago, with an anti HS2 protest camp at the base of the trees. 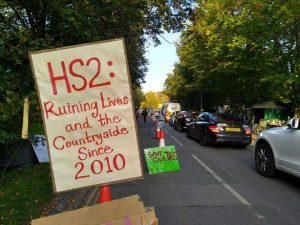 A range of local people, councillors and campaigners led by Alan “Budgee” Woodward, a direct action specialist from Colne Valley Camp and Lizzy Williams, co-founder of StopHS2, have worked together to protect the trees and get the plans changed.

Their first victory was to keep HS2 from cutting down the trees during the road closure last week. By Friday when the cones were removed, it became impossible for HS2 to cut down the trees.

Elizabeth Cairns, a local resident, camp coordinator and XR member said
“We are delighted by this small but important step in having our voices heard, and the recognition by HS2 that their actions on closing the road are both dangerous and unlawful. I for one am committed to holding this site until both these local works are cancelled completely and HS2 is stopped in its tracks. The environmental impact alone of this project in this time of ecological crisis and climate emergency is utterly unjustified.”

Alan Woodward, full time environmental campaigner and camp anchor posted a video as the cones were lifted.
“Road Works End – Perfect. It’s a victory on what has become a really important community issue in the battle against HS2. We stand for the trees and the Environment as well as democracy. Everything that HS2 Limited does not. The real battle is yet to come we hope the Oakervee review will result in cancellation of HS2, they’re destroying our environment for our future. It’s important not to take the pressure off until we see the back of the project. I’m not going anywhere I have my piano, a bed and plenty of firewood for the winter. We shall see!” 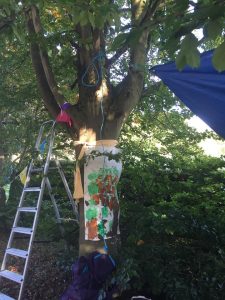 The Save Link Rd Trees campaign has also welcomed news that HS2 Ltd and Bucks County Council have agreed to suspend and review all work on Link Rd Great Missenden until “early 2020.”

Elizabeth Cairns, one of the campaign co-ordinators said
“Until two weeks ago, the Great Missenden County Councillor, Bucks County Council, the Parish Council and HS2 Ltd were telling local people that the scheme, including the felling of 9 mature trees was necessary. This suspension of the works is the direct result of the massive push back by local people and StopHS2 campaigners and the creation of a peaceful direct-action protest camp at the site. A success for people power. It’s now vital that the newly revised scheme already put forward by Bucks CC to HS2 Ltd is shared with the community and a proper engagement process put in place, including the protest campaign, local residents and key Great Missenden organisations such as the Village Association. To date, no-one in the campaign has actually seen the draft plans, so we are urging caution at what is only the start of this review process.”

Save Link Rd Trees has been inundated with messages of thanks and support from local people, but supporters also know it’s premature to be celebrating until we see the final revised scheme in black and white. The victory is still only half won, pending the final outcome of the review process.

The camp has continued, with a pumpkin parade organised from 5.30pm today.