Since this article was published, a petition has been published on the parliament website, calling for exactly the same thing. It can be signed here.

This morning, coucillors at Buckinghamshire County Council voted unanimously to ask the Government to halt HS2 enabling works in Buckinghamshire until they had issued Notice to Proceed.  In addition the motion asked that HS2 Ltd significantly improved community engagement with those affected.

The motion was proposed by Cllr Charlie Clare and seconded by Cllr Angela Macpherson, who both spoke passionately against HS2.  This was followed by speeches from a series of councillors, who had numerous different reasons for agreeing with the motion: although a number of them said that the motion should have been stronger in its opposition to HS2.

He went on to say that

“Day by day more and more doubt is thrown onto the affordability and the business case for HS2 … HS2 have postponed providing the information required for Notice to Proceed – one can only assume because the numbers don’t add up yet – until the end of the year.”

Listing the scale of the environmental damage done by HS2 under the guise of enabling works, Clare said

“There are many examples, but perhaps the most severe is at Steeple Claydon. This ‘de-veg’ plans to remove 500 acres of historic Countryside, kilometres of hedgerow, over 75 acres of woodlands and more than 100 mature Oak Trees. The Oaks are generations old, some surely over a century old and as such irreplaceable”

Clare also highlighted the issue from the second part of the motion about HS2 Ltd’s community engagement, pointing out that landowners at Steeple Claydon had been given only three week’s notice. He spoke about what Mark Thurston, HS2 Ltd said about community engagement and yet, Thurston was ignoring a petition signed by 2,300 local residents. Clare said

“Mark Thurston’s callous disregard of our residents and his complete lack of response to residents’ petition give us just a glimpse of how HS2 plans to treat Buckinghamshire.

“We cannot expect our residents to put up with this treatment for a project that has not yet been costed, designed or justified in anyway.”

Angela Macpherson backed up Charlie Clare speaking of the “reality” of the “devastation on the ground” and “illogical questionable way that HS2 are proceeding”. She went on to say that she had made representations to both Chris Grayling and Michael Gove about the damage.

Macpherson quoted from HS2 who had said “our aspiration is to be a good neighbour every single day by respecting the people and communities we impact…. in order to build the railway we must earn the trust and credibility to do so… whilst continuing looking for ways to lesson the impact of the project” going onto say that this was not what communities were experiencing. Macpherson said “its about people and their mental health”.

Martin Tett spoke next, listing the early and ongoing ways that Bucks County Council has sought to oppose and mitigate against the effects of HS2. He said

“There are vastly better ways to spend this obscene amount of money” listing commuter rail routes, broadband and west to east links in the north of the country as examples.

Steven Lambert, the Lib Dem leader, said that the first reason for opposing HS2 was the impact on the environment: “You can’t just replant historic woodland.” he said. He linked HS2 to climate change, due to the destruction of the environment. He said that the motion did not go far enough, and that it should include MPs. He also praised Cheryl Gillan in spite of their political differences.

Highlights of the other speeches include

One theme that came up time and again was that HS2 were ripping up hedgerows during bird nesting season: John Chilver pointing out that there were many months in the year when there was no nesting, but HS2 had not provided any information as to why it could not take place then. 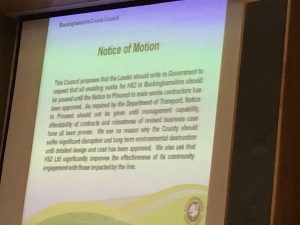 Gareth Williams asked for a unanimous vote to send a message in case there was “hypothetically to be a leadership contest” in a political party.

The motion was passed unanimously with cross-party support and no abstentions.

“This Council proposes that the Leader should write to Government to request that all enabling works for HS2 in Buckinghamshire should be paused until the Notice to Proceed to main works contractors has been approved. As required by the Department of Transport, Notice to Proceed should not be given until management capability, affordability of contracts and robustness of revised business case have all been proven. We see no reason why the County should suffer significant disruption and long term environmental destruction until detailed design and cost has been approved. We also ask that HS2 Ltd significantly improves the effectiveness of its community engagement with those impacted by the line.”

The full council meeting can be watched here, with the debate being under item 8, motions to proceed.