You’d think that Andrew Adonis, the former Secretary of State for Transport who introduced HS2, would have a better idea than most about the realities of daily travel in the regions. It turns out, he doesn’t.

In a tweet on Friday, it seems he encountered a train unfamiliar to him: the Pacer.

What’s this excuse of a train on the line to Harrogate from York! Doors don’t open properly. No heating. Dilapidated. Another higher priority than spending £4.2bn on no deal Brexit planning! pic.twitter.com/YnSy2vUw12

2 car ancient train-bus Pacer from York to Harrogate literally shuddered to start & I thought it wouldn’t make it out of York station. ‘The doors just about work,’ said the guard after fiddling around when they failed to open

The train is called ‘Grayling’

The thing is, Pacers were problematic when he was planning HS2, and we’re not the only people to have noticed that:

I think you know the answer to your own question. Your were after all Minister for Transport in the last Labour Government so presumably knew how bad they were even 10 years ago !

There was justifible anger from some who responded: 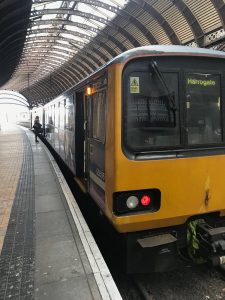 Adonis complains about his train

Have you only now discovered the joy of the Pacer? We have been banging on about them for years. Weren’t you Minister for Transport and on the Infrastructure Commission? @MichaelSadgrove for info.

Don’t get up north very often? I’m so glad that 13yrs of a Labour government solved the north’s transport issues and gave us a rail system fit for the 21st century. Altogether now… 🎶Things can only get better…..

Some dickhead spent the transport budget on the ridiculous vanity project that is HS2https://t.co/tdfEbDSYjV

If only your 3rd Child #HS2 wasn’t such a spoilt brat and didn’t use up all the pocket money.

What happened? Some Muppet decided to splurge billions of pounds on vanity project HS2 rather than invest in the current network. Who could that have been 🤔

You were Secretary of State for Transport and you clearly had no idea what the railways were and still are actually like outside the Home Counties. You presided over this So your opinion on Brexit hardly counts now does it

Rich coming from you. If you hadn’t helped facilitate HS2 we’d have more than enough to spend on existing trains and track.