Clearly, when the FT first reported last week that Morgan was due to get the boot, it was before the Government had set up his replacement or sorted out his payoff, hence Morgan was the only one in authority who would go on the record about the fact he was just about to get the sack.

The most hilarious part of the affair though has to be Nus Ghani, proving on LBC that she can be just as clueless and incompetent as Chris Grayling.

Quickly editing the quote he used on Friday, Stop HS2 Campaign Manager Joe Rukin responded to the news by saying:

“Typical of the spin we have come to expect when it comes to HS2, Terry Morgan has apparently resigned of his own accord, when the press has been reporting that he was about to be ‘sacked by mutual consent’ for the last week. It says everything everybody already knew about Chris Graylings’ competence and judgement that he’s just sacked someone he heralded as ‘world-class’ just five months ago.”

“You cannot blame Terry Morgan for the mess at HS2 because it was years late and billions over-budget well before he arrived in July. Because his face didn’t fit, we now have another identikit boss through the revolving door at the jobs-for-the-boys gravy-train that is HS2 Ltd.” 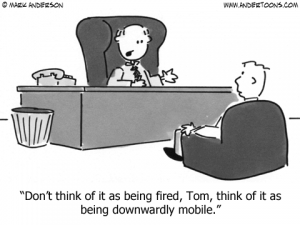 “The bottom line is that HS2 is a mess, it’s always been a mess, and imagining that this is the fault of a man who has only been in charge for four months is a delusional attempt by politicians to absolve themselves of the reality that it is their lack of scrutiny and objectivity that is responsible for HS2 being a disaster.”

“About the only noticeable thing Morgan has done since he joined HS2 Ltd has been to claim HS2 would more or less wipe out unemployment, stating it would not only create 500,000 jobs, but that that was ‘just the beginning’. To us, this proved Morgan to be absolutely the sort of fantasist who is willing to say anything, which has always been a perfect fit for HS2 Ltd in the past.”

Whilst phoning it in as Rukin typed, Chair of Stop HS2 Penny Gaines added:

“Terry Morgan was clearly the wrong person for the job in the first place. Whilst Crossrail appeared to have far fewer problems, the reality was he’d managed to keep them quiet until he joined HS2 Ltd. HS2 is a shambolic project that the DfT has always been unable to get to grips with. It should be put out of its’ misery and cancelled as soon as possible. HS2 is a project beyond saving, with plans to slow down and massively descope the project.  The government should put this railway out of its misery and cancel it entirely before spending any more tax payers money on it.”