Last week, some Polish environmentalists made the mistake of assuming they could walk through a meadow near Colne Valley without being set upon by a group of thugs in orange. As has become the norm for the site, HS2 Ltd staff acted in an abhorrently aggressive and abusive way to people who were simply walking through a field. The HS2 staff behaved in a way that you simply wouldn’t expect, in a way that someone would only behave if they knew they were going to get away with it, in an organisation with a culture of not giving a shit about people. Here is the shocking footage, which contains a lot of swearing.

You just hear (at about 25 seconds) that there was never any diaglogue, but from the moment the first of the environmentalists was met by the HS2 staff, the shouting and swearing starts. As the others approach, you can see the start of an alleged assault, with a mobile phone being used to film the incident flying through the air at 48 seconds. The phone this film was made on being deliberately knocked down at 2 minutes 30, just after the staff try and trip over another protestor. 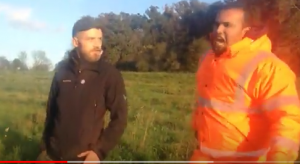 Joanna Pawluskiewicz said: “We were very surprised by the behaviour of the guards. There was no information at the entrance to the area that it was forbidden to go in. We behaved peacefully, tried to talk to them, but we were treated brutally. The behaviour of the security guard was very unprofessional. They took my phone, shouted at me to delete the videos, and finally when I refused, one guy did it by himself, invading my privacy. He went through my iPhone and deleted the recordings. Fortunately, I was able to get them back.”

College Adam Bohdan added: “Our understanding is that guards have no right to use violence if somebody is not aggressive or posing a threat to them. The guards appeared to be aware that they were behaving potentially unlawfully because they tried to destroy our cameras and delete our video records. Therefore, we have submitted a complaint about the security company to the Security Industry Authority. We are going to undertake other legal steps against these security guards.”