Last week, HS2 Ltd published their planning context reports for Phase 1 of their scheme. The reports provide an overview of HS2 works, some of which will need approval by local authorities under Schedule 17 of the HS2 Act. HS2 Ltd say the point of the suite of documents, which cover ‘individual planning authorities’ along the route Phase 1 is to ‘establish a streamlined approvals process’.

However, there seem to be two problems thus far. First is that HS2 specifically state:

“These reports provide an overview of the High Speed Two (HS2) Phase One works in each local authority area.”

The issue there being that they don’t. Several local authorities which HS2 goes through have no report listed, these being;

Cherwell DC, Solihull MBC, South Bucks DC, Three Rivers DC, Wycombe DC, and the London Boroughs of Brent, Camden, Ealing, Hammersmith & Fulham, Kensington & Chelsea, as well as the City of Westminster. So with there being 9 reports, and 20 planning authorities which HS2 goes through, they’ve actually missed more than they’ve published.

Also, without having gone through all the documents that do exist in detail, there does seem to be one rather large cock-up relating to the route covered by Lichfield District Council. In 2014, just a fortnight after a visit to the Lichfield area by the HS2 Hybrid Bill Committee, HS2 Ltd ‘decided’ they were going to make significant changes to the route around the city, after it had been admitted to the Committee that a much better solution for the area would cost about the same, and could actually be delivered quicker. 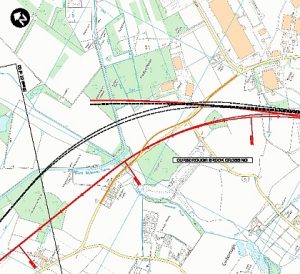 As HS2 Ltd said at the time:

“The amended route will now pass under the A38, the West Coast Main Line and the South Staffordshire line rather than run over them on viaducts. The alignment will also be amended to remove two crossings over the Trent and Mersey Canal.”

These proposals were put forward as AP2, an amendment to the HS2 Bill, and were accepted in their entirety after consultation in 2015. However, this point seems to have missed by, err, HS2 Ltd, as there are a whole set of viaducts, embankments and raised sections which appear on the planning context report (pages 26-28) published last week, which shouldn’t be there. Some of the specifics are:

So while the maps in the report are right, the overview of HS2 works which have been set out to ‘establish a streamlined approvals process’ are completely wrong, being three years out of date. This error was pointed out to HS2 Ltd on Thursday 29th June, the day the document was published, but as of yet remains unchanged.

We would suggest that residents and authorities from other areas which saw changes to the route throughout the development and petitioning process, check both the descriptions and maps set out in these planning context reports.

One significant additional worry is that this report has been published as HS2 Ltd is tendering for firms to make the final design of the route, and you have to wonder which documents they have been given.

All the reports are linked below as published on the HS2 Ltd website, and no, we don’t know why all those others are missing;