While it seems there is no sign of a replacement for HS2 Ltd Chairman David Higgins even being looked for, even though Gatwick Airport say he was meant to start his new job there on January 1st, more of HS2 Ltd top brass have joined him and CEO Simon Kirby in jumping ship.

Initially, the Department for Transport refused to comment on the loss of James Findlay whose departure from his role as Chief Information Officer was confirmed this week. In 2015, Findlay was reported to be on £135,000, with The Sunday Times putting his current salary at £155,000.

Findlay has been replaced on an interim basis by Andrew Turner, who joins HS2 Ltd from Crossrail.

However, Stop HS2 has been informed that Findlay is not the only one going, with strategy 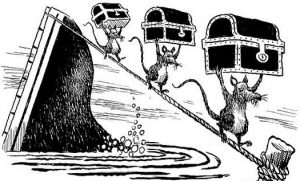 There is some confusion however, as whilst the same source informed Stop HS2 about both departures, HS2 Ltd will only confim that Kirk has ‘gone’, though he remains on the payroll, and indeed on the HS2 Ltd website.

With these roles being all about getting HS2 built on time and on budget, and it just about being the time that the importance of this work should be coming to the fore, the departure of such senior staff is rather unexpected.

You might even think, that like Higgins and Kirby did with Network Rail, their staff have learned from their example and have decided to get out before the true scale of the mess the organisation is in, is realised. HS2 Ltd have now confirmed they expect that Higgins might continue in his role at HS2 Ltd whilst working for Gatwick for ‘up to a year’, despite the fact there may well be some conflicts of interest, as pointed out by Birmingham and Manchester Airports, who have let Higgins see sensitive commercial information as part of his HS2 role.

“If HS2 is, as it claims, on the brink of its great triumph, getting royal assent and starting to build, why are so many people leaving? You can only imagine they are getting out before the proverbial hits the fan. It is easy to smell a rat, as so many of them seem to be leaving this sinking ship.”