In an unfortunate foretaste of what people can expect from the construction of HS2, demolition work will be taking place on Christmas Day and Boxing Day.

The Camden New Journal reports that

Network Rail has sent letters out to its “line-side neighbours” in Delancey Street, Park Village East and Mornington Crescent announcing cargo shed demolition works between 7am and 7pm on December 25 and 26.

…The letters said the works are being carried out “on behalf of HS2” and that “disturbance is unavoidable”.

In a letter from Sarah McArdle, Network Rail’s community relations manager, residents have been told

“We need to undertake this preparatory work in order to allow for the demolition of the west-side carriage shed. The existing building currently supports vital overhead line equipment, which allows electric trains to operate in and out of the existing Euston station.”

“…Overhead line equipment needs to be relocated and modified with some alterations to the existing tracks to enable the continued safe operation of the railway…. Unfortunately the type of equipment and machinery we have to use does mean some disturbance is un-avoidable.

“I can’t believe someone, somewhere didn’t think ‘hey, HS2 is obviously such a big thing for everyone in Camden, why don’t we give them a break on Christmas Day?’”

The Journal goes on to say
Christmas Day HS2 works is the latest outrage from the Government-funded company in charge of the £63billion project mistakenly sent out demolition letters to the wrong housing block on the Regent’s Park estate last month. 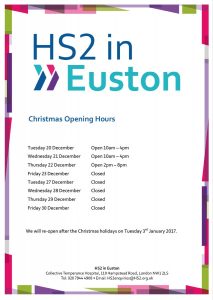 HS2 staff definitely not to be disturbed

Preparatory HS2 works around Euston, Camden Town and Mornington Crescent have already  begun with boreholes being drilled in Park Village East, which has been closed to traffic. The National Temperance Hospital is being demolished and large replacement housing blocks are being built on the Regent’s Park estate.

According to the Journal

Network Rail said it was “required to undertake these works on behalf of High Speed 2 in order to allow the existing railway to operate safely into Euston during future construction for the high-speed railway”, adding it would “minimise any unnecessary noise” to “line side neighbours”.

Not surprisingly, no-one from HS2 Ltd was available to comment.