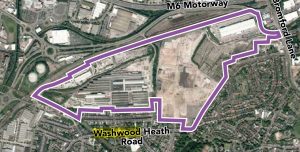 One of the great ironies of HS2 is the number of job creation schemes it is stopping.

Take Washwood Heath in Birmingham, a site originally developed for industrial purposes in Victorian times, which through a combination of events, had become available for redevelopment as a huge high tech manufacturing park, with thousands of jobs for local people.

That is, if HS2 Ltd hadn’t got its beady eyes on it, for washing trains and storing stuff.

The use of the site has been a bone of contention between Birmingham politicians and HS2 Ltd since 2011 – we first wrote about it here and here. The latest in the saga is that HS2 Ltd are refusing to give up any land until 2026.

“the permanent and temporary land take [by HS2 Ltd] should be the minimum as far as possible and for the shortest time, with a hand-back configuration that after construction will attract maximum business use of the residual site”.

“Its ambition seems to be to lock up the whole site for the entire construction phase until 2026 and then hand some nugatory hectares back. This is not acceptable. We need land now.”

The Post also says that a group of Parliamentarians have written to the House of Lords Select Committee about HS2 Ltd and the site.  The paper says:

And ten local politicians have written to the House of Lords High Speed Rail Bill Select Committee, which is looking at the detailed plans for the new service, urging it to make HS2 Ltd free up the land.

They said: “We are supporters of HS2 and believe it will benefit our city and the country. But what we must not allow is for some of the poorest people in the country to be denied opportunity by an investment that is supposed to help.”