With the House of Lords HS2 Hybrid Bill Committee still sitting, the Government has finally admitted the bleeding obvious, that the HS2 Phase 1 Bill will not be passed this year.

The reason for the latest delay is supposedly the number of petitions from residents and groups which the Lords have had to hear, despite the fact that they dismissed almost half of petitioners without hearing from them, and all told will only hear about a quarter of the petitions which the House of Commons Committee did. 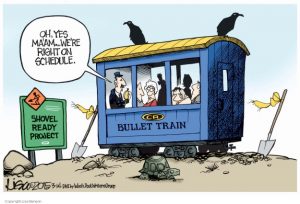 Indeed, it’s worth remembering that the original plan from Government was that the Hybrid Bill was meant to have passed before the last election, meaning that by the time it is now scheduled to pass, around February/March 2017, it will already be 2 years late before construction has even started.

The Sunday Times has reported that the committee is now expected to publish their report on 12th December, which will be considered on 9th January, after which amendments to the Bill may be submitted. If the  House of Lords to propose and pass amendments to the Hybrid Bill, these would then have to go back to the Commons.

Whatsapp
Tags: News
News
2 comments to “HS2 is delayed again, and it’s all our fault. Obviously.”