HS2 Ltd have abandoned their plans to save the Hillingdon Outdoor Activity Centre, 22,000 children from London use each year, from destruction. 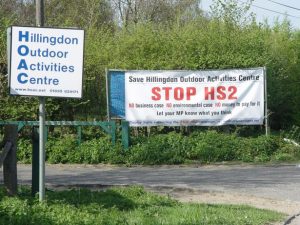 Based just inside the M25 on the green belt north of Uxbridge in a former gravel pit, HOAC’s idyllic site has flourished over the years and now features a stunning 46 acre lake, fields, woodlands, a campsite, pedal karting track, archery range, climbing complex, boat hire facilities and more. HS2 Ltd plan to dissect the site with a viaduct, which would make it completely unsuitable for such activities.

“Tucked inside the M25, I discovered a magical oasis of wilderness. We walked through woodland and maize fields. We mountain biked up and down fantastic singletrack trails. We canoed past herons and kingfishers as shoals of fish darted through the clean water beneath us. We climbed to the top of a superb climbing wall and looked out over green trees in every direction.”

Hopes had been raised that HOAC could be moved to a neighbouting quarry in Denham, at the time HS2 Ltd said: “Subject to planning approval being granted, it should be possible to relocate HOAC, currently in Harefield, to the Denham Quarry site with a 25-acre lake by 2018.” 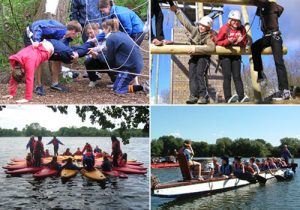 “Despite our very best efforts to relocate the Hillingdon Outdoor Activities Centre to Denham Quarry, it has now become clear that escalating costs mean it won’t be a sustainable long term option.”

According to the DfT, the anticipated cost of relocating HOAC had more than doubled to £55 million because of construction, land costs and compensation arrangements. The fact this is seen as a reason for not relocating HOAC, when of course the cost of HS2 itself has also doubled, seems rather hypocritical.

email
Tags: News
News
One comment to “HS2 spells the end of the line for HOAC”