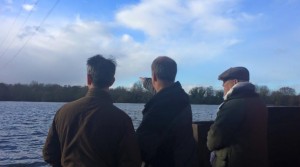 Earlier today, the HS2 Hybrid Bill Committee issued a statement on the case for a Colne Valley Tunnel.  The current plans include a viaduct over the lakes at the Hillingdon Outdoor Activities Centre (HOAC).  Unfortunately, in the same week that Additional Provisions show that moving the Heathrow Express Depot to Slough to make room for HS2 will cost £215 million and blight numerous more people, the Committee decided that spending £200 million to reduce blight for many thousands wasn’t worth it

Based just inside the M25 on the green belt, north of Uxbridge, HOAC’s idyllic site has flourished over the years and now features a stunning 46 acre lake, fields, woodlands, a campsite, pedal karting track, archery range, climbing complex, boat hire facilities and more. Around 22,000 young people come to HOAC each year, central London and Reading as well as more locally to take part in activities ranging from kayaking to caving, as well as numerous others, making it a vital community asset.

Hillingdon Council commissioned two independent studies which were published earlier this year, one looking at the real costs of the effects of the HS2 plans for Hillingdon, the other looking at alternative options to the viaduct.

According to the reports, there are huge technical benefits from tunnelling, as well as significantly less impact on the environment, communities and businesses in the Colne Valley.

However, the HS2 Hybrid Bill committee statement shows that the cost of a new tunnel outweighs any possible long or short teem benefit to the people in the area, claiming

“Estimates of the net additional cost of a tunnel over a viaduct generally exceeded £200m, although there was disagreement on how to arrive at an appropriate assessment. We do not direct further studies because we doubt that these would converge on a figure significantly less than £200m.”

However, although petitioners on the route have had years to prepare themselves for petitioning, affected people and businesses in Slough have a matter of weeks, following the announcement in late June of the moving of the Heathrow Express depot from the Old Oak Common area to Slough,to prepare and submit their petitions, with a deadline of Friday 14th August.

It must have been clear to HS2 Ltd and the Department for Transport for some months that they would need to move the Heathrow Express Depot, but there has been no community engagement with local MP, Fiona Taggart saying that it came as a “shock” to the local council.  Moving the depot will cost £215 million and blight numerous more people.