Communities living along the proposed M18 route of HS2, which has unveiled by Sir David Higgins in July, have launched a report stating the new route is unfit for consideration by the Secretary of State on account of the untrue, unresearched and misleading statements.

One of the most damning claims it that the claim there would be fewer residential demolitions associated with the new route, because HS2 Ltd had been using out of date maps. This is of course completely correct, as it is clear HS2 Ltd used six year old maps to design their new route, meaning that the Shimmer Estate in Mexborough, construction of which started four years ago, does not appear on their plans even though the HS2 route is due to go right through it. 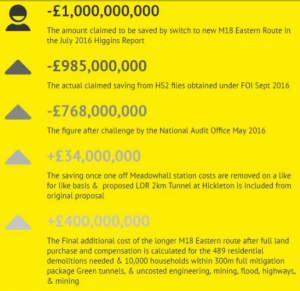 The communities believe that the failure to take the costs of the demolitions associated from this error, along with other issues they have identified would mean that far from being cheaper than the original Meadowhall route, the M18 route would be more expensive. Other issues the communities have identified as being false assumptions include the statement from HS2 Ltd that the new route avoids former mining areas.