In November 2015, we reported that 46 staff at HS2 Ltd earn more than the Prime Minister. We’d come to this conclusion by looking at a table of salary information and doing a bit of maths. The issue was that HS2 Ltd had published salaries of their top executives in a range, not as absolute figures. As such, we could figure out that it had to be at least 46 people, but couldn’t be absolutely certain that it wasn’t more.

An investigation from the Daily Mail has shown that we were pretty on the money, but not dead on. It’s not 46, but 47 staff at HS2 Ltd who earn more than the PM. Having said that, it may well have been that in November it was 46, and someone else has been taken on since the figures The Mail has seen were published. Either way, it’s a hell of a lot, way way too much you might think?

The big change since November is in those getting ‘lower’ wages. Back then, 71 employees got paid more than that figure, but now it stands at 128, up over 100 from the 26 who were paid at those levels in March 2015.

The HS2 Ltd accounts were sneaked out as Parliament closed, a month later than usual and shows that not only was the wage bill for directly employed staff £40m for 601 employees, but the cost of ‘other personnel’ was not far behind at £39.6m for just 317 staff. So whilst directly employed staff got an average of £66,454, their indirect staff costs £124,811 each, before NI and pension costs. 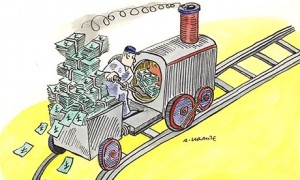 In total, HS2 Ltd have now spent £1.4bn since 2010. HS2 Ltd have claimed that the fact they spent £353m in the last year, which is under their budget shows they are getting costs under control, despite the real reason for the underspend is the fact they are behind schedule.

Meg Hillier, Chair of the Public Accounts Committee which met to discuss HS2 on 11th July, after the accounts had been due to be published, complained that they will now be unable to scrutinise how taxpayers’ money is being spent until September. She said:

“The timing is either incredibly badly planned or deliberate. This is a slap in the face for the public and will be hugely frustrating for many MPs who are worried about the mounting costs when not a single section of track has been laid.”