At Stop HS2, as an organisation, we had been keeping out of the EU referendum.

Our supporters range from the avid Brexiters to the staunch Remainers. Both the Green Party and UKIP are against HS2 but the Greens are officially for Remain, and the UKIP position is obviously Leave.

And then came the Yorkshire Post article entitled Brexit a threat to HS2 and HS3 in Yorkshire, says Cameron:

Speaking exclusively to readers of the Yorkshire Post in central Leeds yesterday, the Prime Minister said: “If we stay in [the EU] all our plans are fully intact and that includes HS2, and what we have said about HS3, and the overall rail investment programme.

“If we come out of course I’m sure we will want to try and maintain these important investments but when you hear nine out of ten economists, the Bank of England, the Treasury, the IMF and now the National Institute [of Economic and Social Research], all saying our economy will be smaller and will generate less tax revenue, obviously that does threaten potentially some public spending programmes.”

First of all, this shows is how out-of-touch David Cameron is with what ordinary people are thinking. From what we’ve seen this is actually encouraging voters into the leave camp – especially when HS2 seems to be prioritised when compared to threats to pensions and the NHS. 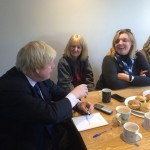 But then the whole of David Cameron’s strategy seems to be backfiring, with trust in David Cameron himself plummeting in a matter of months as the campaign he is leading gets nastier.

The thing is, many of the tactics used are surprisingly similar to the tactics used by politicians to push HS2 through – the personal attacks, the dodgy statistics and the ‘independent’ reports published by organisations with a vested interest.

I have a feeling that these tactics were not invented for HS2. However most people do not take a detailed look at campaigns for or against specific issues, and so they don’t normally notice them.  However with so many people with a vote on the EU referendum, and no clear party line to adhere to, ordinary people are taking a lot of notice of the campaigns and seeing the tactics in use, and they don’t like them.

Of course there is still the question of the EU and HS2.

The first point is that HS2 will not help travel between the north of England and  Paris or Brussels. There is no direct route using HS2 onto HS1.  There could have been, if it had been designed that way, but instead the London terminus is at Euston: the best option currently on offer from HS2 Ltd is the suggestion that someone build an ‘enhanced walking route’ between Euston and Kings Cross/St Pancras – which they say will take about the same time to walk as current routes.

While the choice of terminus does not hinder travellers from Manchester or Birmingham who already take fast trains to Euston, its a different matter for people travelling via Sheffield, Nottingham and Leeds.  At the moment they can catch fast trains to Kings Cross/St Pancras and are in the right place to travel on via HS1 and similarly arrivals from the Continent are in the right place to travel to the north-east.  But if they were to travel on HS2 to London, they would arrive in Euston and then have to make the journey – possibly carrying luggage – to a different station.

The second point is about who is making the HS2 decisions.  We occasionally get comments along the lines that a high speed line like HS2 is an EU requirement.  What is relevant to remember here is that both the West Coast Main Line and the East Coast Main Line meet the international definitions of a ‘high speed line’.  The government could easily argue that we have all the high speed lines we need, if they wanted.  Instead, they are choosing to spend £55billion on HS2.

If the government decided to cancel HS2 they could.