The Public Accounts Committee have questioned whether warnings from the infrastructure watchdog are being taken seriously, in a report published today.

The Major Projects Authority was set up in 2010 to oversee the progress of government projects, and this year merged with another organisation to form the Infrastructure and Projects Authority. However, following a recent inquiry, the cross-party Public Accounts Committee has found:

“We have supported the Major Projects Authority’s efforts to improve project delivery in government and recognise the steps it has taken to strengthen project assurance, improve transparency, and introduce project leadership training. But it is disappointing that after nearly 5 years we cannot see more tangible signs of what impact these initiatives have had.”

This is borne out by the fact that the MPA rated 34% of the government’s major projects as either ‘red’ or ‘amber-red’ at June 2015, meaning that successful delivery is unachievable or in doubt unless action is taken. For the projects due to deliver in the next 5 years, 35% are rated as red or amber-red. HS2 has been rated as amber-red since 2011, and whilst HS2 Ltd and the Cabinet Office agreed to publish 2011 reports on the eve of a judicial review in 2015 after initially exercising their veto, they are still fighting against publication of more recent ones, with a first tier tribunal concerning the November 2014 report due to take place in April.

The PAC concluded that senior officials were dismissive of warnings and that “Ambitious timetables for delivery are of little value to the public if they simply cannot be met.”

“The Infrastructure and Projects Authority told us in evidence the three current programmes it is most concerned about are High Speed 2, Courts Reform and Shared Services—taken together, complex and challenging projects that will continue to require close and careful monitoring.”

“If taxpayers are to get good value for their money, it is vital the Infrastructure and Projects Authority takes action now to ensure it provides effective scrutiny throughout the life of these and other projects.” 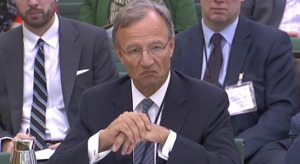 Tony Meggs, head of the MPA – Not happy with HS2

“Ever since 2011, the MPA has published reports on HS2 which have said ‘urgent action is required’ to solve problems inherent with the project, but this urgent action never happens. It is clear that despite the fact alarm bells have been going off constantly for five years on HS2, the people running it have their fingers in their ears and are not willing to listen to criticism of any sort, even when it is intended to help them. When the man in charge of scrutinising projects lists HS2 as the number one project causing him concern, someone should really be listening.”

“It is a complete disgrace that MPs will be willing to vote HS2 through this week without the first clue or care about the issues which have caused the MPA to rate it in danger of failing for the last five years. We can only hope the Lords will take their job to scrutinise this vanity project more seriously.”