One of the many environmental fig leaves that proponents of HS2 have used is to cover up the figures that show HS2 will not reduce carbon dioxide in any meaningful timescale  At first HS2 was assumed to be carbon neutral (probably), although HS2 Ltd’s own figures now show HS2 to still be causing increased carbon emissions long after it has opened, and possibly even after 2136.

This should be no surprise: a 2010 paper “High-Speed Rail: Lessons for Policy Makers from Experiences Abroad” says:

There has yet to be a detailed, systematic evaluation of the impact of an expanding HST
network on the reduction in CO2 emissions at either an aggregate or country level. However, information is available on the environmental effects of HSTs, particularly as regards their energy consumption. According to estimates conducted by van Essen et al (2003), energy consumed per MJ/seat mile by air transport is 240% higher than that attributable to HSTs. However, the energy consumed by HSTs is 12.8% higher than a petrol-driven car when traveling on the motorway, 55.9% higher than a diesel-driven car on the motorway, and 140.9% higher than an intercity train. Other estimates (van Wee, van den Brink and Nijland, 2003) conclude that while energy use and emissions for HSTs are much higher than for conventional trains, they are relatively similar to those for cars and buses. In the most favorable analysis for HSTs –conducted by García Álvarez (2007) for Spain, HSTs and conventional trains were reported as producing similar emissions on two of the lines analysed, while the conventional train was much more efficient on the remaining line.

Clearly, the overall impact of HSTs on energy consumption is heavily dependent on the source of its traffic – whether it is newly generated or attracted from previously existing modes (and, in the case of road transportation, on whether it replaces cars or buses). However, HSR is not a particularly useful tool for fighting CO2 emissions, being less environmentally efficient than conventional modern trains. Further, building a new and separate HST line involves significant CO2 emissions that environmental HST analyses do not take into account.

The key thing here is that passenger figures from HS2 Ltd say that 69% of HS2 passengers would otherwise have used conventional rail, 26% would otherwise not have travelled at all, and only 1% gone by air. 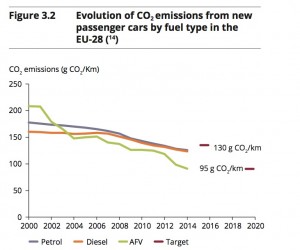 To be fair, that document was from 2010, and no doubt proponents of high speed rail will argue that HS2 will be better than current high speed trains.  They may even be right – but that ignores the fact that there is ongoing research into improving the efficiency of cars and planes as well.  For example, the European Environment Agency recently reported that even in 2014, new car emissions were ‘significantly below the 2015 target’ and new vans were below 2017 targets.

What is clear is that even when HS2 was first proposed, high speed rail was not considered a good way of reducing carbon emissions.