One of the documents accompanying the Autumn Statement is a Treasury document containing a statement on funding policy regarding the Barnett formula. The Barnett formula dictates the extra funding Scotland, Wales and Northern Ireland get for projects which only affect England.

Up until now, the Treasury has stubbornly said that there would be no Barnett consequentials paid out as a result of HS2, as it is a ‘UK-wide’ project. Whilst it is impossible to say that HS2 is any good for Northern Ireland, the UK Government has until now said that Scotland benefits because trains will leave HS2 tracks to run to Scotland on existing tracks to reduce journey times, and bizarrely has said Wales benefits because you could get a train from Wrexham to the proposed Crewe station.

However, the statement on funding policy now states that Northern Ireland will now get the full consequential, 3.39% of the £55.7bn cost (£1.89bn), and more oddly Scotland will get 9.85% too (£5.49bn), but Wales will get nothing. The decision to give Scotland the full payout, whilst denying Wales the 5.69% (£3.2bn) it should surely be in line for in terms of fairness, seems incomprehensible.

Extract from the statement on funding policy. Please note, the £759,863 shown in the table is the expected increase in spending on HS2 in 2015-16, not the total spend. 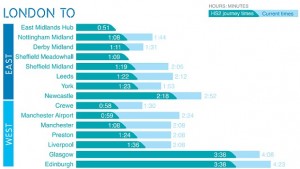 This is in effect saying, that despite the fact HS2 Ltd claim journey times from Glasgow and Edinburgh to London will come down by about half an hour, HS2 brings no benefit to Scotland. Wales however, which would not have any trains running on from HS2 somehow does benefit.

The only reasoning that makes any sense for this about-turn is that Plaid Cymru have only 3 MPs, whilst the SNP have 54 (2 MPs have recently resigned the SNP whip, on what they hope is a temporary basis) and George Osborne was worried the SNP might decide to vote against HS2 when it comes back for 3rd reading. Of course whether this makes any difference to the SNP has to be seen, as Barnett money is effectively giving them the tax revenues raised in Scotland to pay for HS2 back to Scotland.

Adding the £7.4bn which will now be due to be paid to Scotland and Northern Ireland onto the updated £55.7bn bill for HS2 puts the overall spend as a result of the project at £63.1bn. If Wales were to be included, the total would stand at £66.3bn.