In a speech in September 2013, McLoughlin was more specific.

“Already the line is operating close to its limit. That’s why when Virgin wanted to run new direct trains this year to Shrewsbury and Blackpool, Network Rail said point blank: no there isn’t the space.”

This statement was depressing on two levels, both of which stem from the fact that what he was saying was completely wrong.

The first point is that the Secretary of State for Transport doesn’t seem to know the difference between Network Rail and the Office for Rail Regulation. Whilst Network Rail did object to the proposal, the decision not to grant the application was made by the ORR.

The second point was why the ORR said no to the new service, which was obviously not same as the conclusion put by McLoughlin. Back in 2013, the ORR put their decision not to approve the application from Virgin trains squarely on the shoulders of Network Rail, and their poor performance:

“Although we are unable to grant access right now, we are putting pressure on Network Rail both to improve its performance and to carry out improvements on the West Coast Main Line so that the question of new services from London to Blackpool and Shrewsbury can be looked at again as soon as possible.”

True to their word, now performance has improved the ORR have looked again, at least in terms of the Blackpool service, and have granted permission for Great North Western Railways to run extra services. In fact, in terms of the number of trains, they have granted permission for more trains than Virgin applied for two years ago. In 2013 Virgin proposed 2 extra weekday return services to both Blackpool and Shrewsbury, whilst from 2018 the new GNWR service will run 6 weekday returns between London and Blackpool. 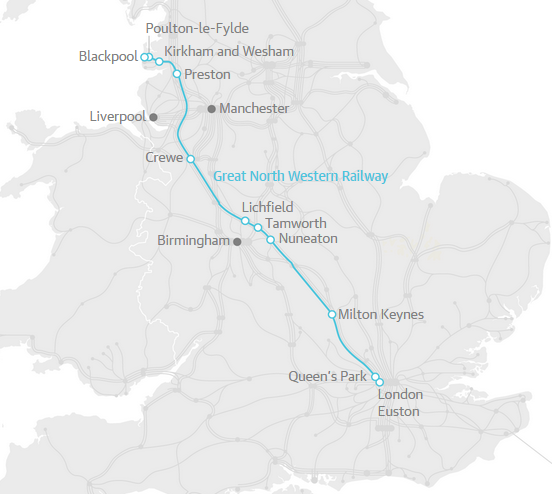 The approved GNWR service will now start in 2018

GNWR will stop at Crewe, Preston and Poulton-le-Fylde, and on completion of other work by Network Rail, hope to be able to add Kirkham and Wesham, Nuneaton, Tamworth, Lichfield Trent Valley and help out with one of the main real drivers for HS2, the London-Milton Keynes commuting problem.

However, there is one drawback, and yes of course it has been caused by HS2!

In a move which may well become more commonplace for services which currently exist on the West Coast Mainline, currently all of these trains are not expected to get as far as Euston, but to terminate at Queens Park on the Bakerloo line.

The reason for this of course is the disruption planned at Euston due to HS2 construction work, which will reduce the number of tracks available to get into the station, most likely for the best part of a decade.

Whatsapp
Tags: News
News
2 comments to “West Coast Mainline not as full as HS2 proponents like to make out.”